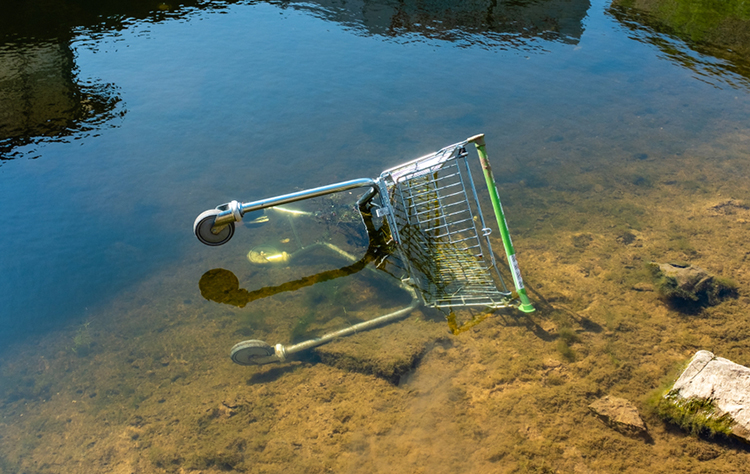 MIRRORING incredible scenes in Venice, where tourist-free canals produced fantastic displays of marine life swimming freely in the now clear waters below, Dublin followed suit with some beautiful sights of its own.

Vintage Quinnsworth shopping trolleys, bikes, discarded handguns and a treasure trove of relics from times gone by are now visible in the once murky waters of Dublin’s intricate canals and main river, the Liffey, thanks to the dramatic lack of footfall from tourists and locals amid the covid-19 lockdown.

Local environmentalist Danny Shields described today’s incredible scenes as “nature taking back control. The water is clear and blue. The real Dublin has been revealed.”

“It’s amazing to see Dublin’s wild life revealed in its natural habitat – at the bottom of the canal,” said Garda scuba diver Anthony Price, who pulled yet another semiautomatic pistol, the 26th weapon the team found this morning. “They’re a beautiful creature, but quite dangerous when triggered”.

Now flourishing in the clear canals, rare species of shopping baskets dating back to the 1980s were also among the beautiful flock, sparking calls from locals for better resources for the city’s canals and river.

“The beauty here is astounding; look over there, a perfectly preserved BMX,” local wildlife enthusiast Darren Rice pointed, looking through a pair of binoculars, “I believe it’s a rare Mongoose Legion Freestyle L100 too – I haven’t seen one of them around here for 30 years”.