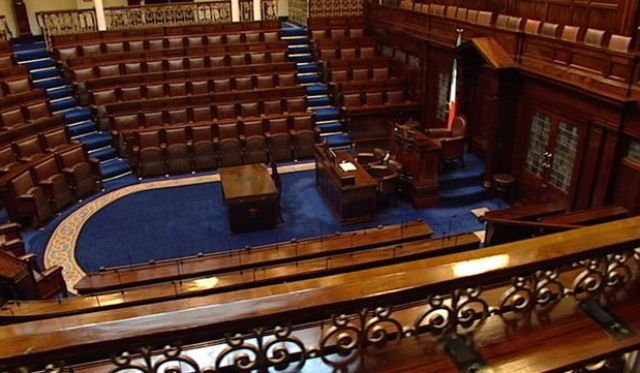 HERE’S what’s in store for all new and returning TDs as the 33rd Dáil sits for the first time.

There will be considerable back-to-Dáil traffic in Dublin City as eager parents drop their TD children off at the gates of Leinster House. Expect the mounting of pavements and parking on double yellow lines.

To signal the beginning of the new Dáil, a massive gong, made from the melted down gold fillings in the teeth of the 1916 leaders, is struck by a member of the public chosen at random in a lottery.

Today is the turn of 103-year-old Margaret Healy, and she will kick things off at 12pm once the Proclamation is read out by the Chief Clerk of the Dáil, who’s only dying to watch himself back on the Six One News later this evening.

President Michael D. Higgins will be in attendance and will fill the role of boxing referee; only there to spilt up any fights between TDs. President Higgins has asked for everything to be wrapped up by five, he likes to watch Pointless in the evenings.

Every new TD will have to stand up in the Dáil and introduce themselves, tell one interesting fact about themselves and then do a party trick.

It can be an emotional day for first time TDs and many, in moving scenes, break down in tears after being reminded of their new salary, expenses and pension entitlements now they’re in the Dáil.

Sinn Féin warned by Mary Lou McDonald to ‘keep it together for one fucking day’.

FF TD Jack Chambers is delighted to see the new youngest TD James O’Connor show up, as he now has someone he can bully.

At some point Verona Murphy will be politely asked to extinguish a miniature burning cross.

If there is more than one nominee for the position a knife fight is staged between the Ceann Comhairle candidates.

The big box office draw on day one of a new Dáil is usually the election of a new Taoiseach, however, it’s unlikely any one candidate will get the required number of votes.

TDs are free to put forward someone to nominate as Taoiseach; this can be done by calling out a TDs name, or the nomination can be delivered via an intepretive dance.

Once this is done the Dáil descends into 60 minutes of unintelligible shouting and bickering. Some more irate TDs strip down to their underwear while singing the national anthem.

The major party leaders then gather on the floor of the Dáil chamber for ‘The Great Burning’. This is when party leaders, having failed to secure a majority, throw all their election promises in a pile and set fire on them, as is tradition.

Taoiseach Leo Varadkar is expected to gracefully step down from his role, while making snide remarks about how Sinn Féin are a bunch of provo bastards at the same time.

The failure to elect a Taoiseach will result in the current Taoiseach Leo Varadkar heading to the Aras to tender his resignation. He then becomes caretaker Taoiseach. Until a successor is voted in, all menial tasks such as unclogging the Dáil toilets, emptying the bins and locking up at night fall to the caretaker Taoiseach.