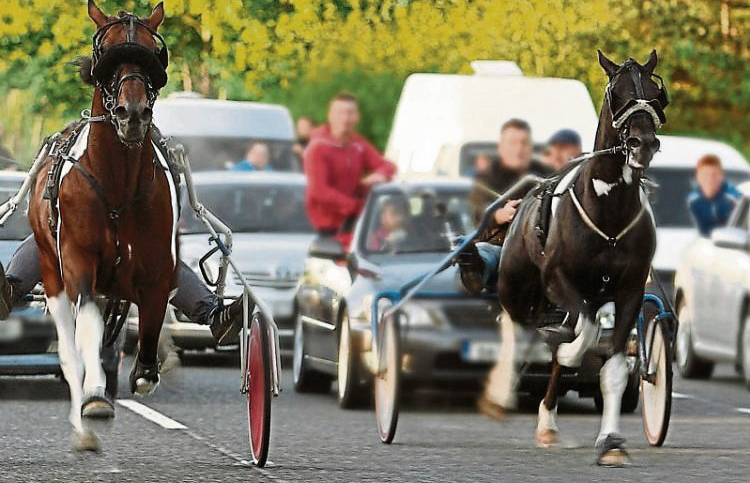 DESPITE a false start due to commuters on their way to work delaying last weeks 6 furlong chase, trainer John Anthony Reilly’s 4/1 favourite Starlight took the 200,000 guineys at the 7.35am race on the N7 last Saturday morning.

Race adjudicators lined the field in anticipation of this year’s Traveler Gold Cup which saw dozens of spectators cheer on both contenders from the safety of their vans and Volkswagen Passats, hanging out of windows, egging on the terrified piebalds.

“She had a great sayson an’ won the M50 Steeplechase lass month, she did,” the award winning trainer and breeder told WWN, before praising his jockey, 15-year-old Mickey Joe Ward, “he bet her well with the whip, kept her steady all the way til her hooves were red hot”.

Starlight becomes the 5th winner for the trainer, who pointed out that the going was firm on the day, due to the course being made entirely from tarmacadam – a going not particularly a favourite for horses.

“Her legs are still a bit sore, but we’ll get another few races out her before she drops dead on the road and we have to leave her for the council,” Reilly explained his unique method, “as long as she’ll make me a few pound between now and then, who cares”.

Much like professional horse racing which saw 22,000 horses slaughtered over the last 5 years for not running fast enough, some high performing piebalds this year failed to make the N7 races last week due to over exhaustion, with one even favourite horrifically crashing into cars in Waterford city last month leading to the piebald being put down.