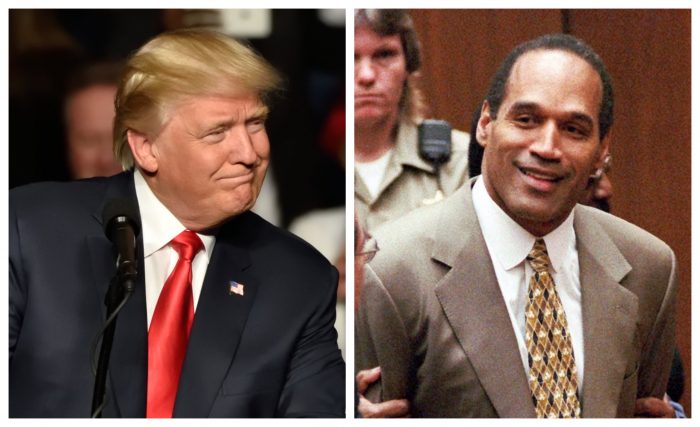 THE Republican controlled Senate has voted to acquit him on charges of abuse of power and obstruction of Congress, allowing US President Donald Trump to take his rightful place alongside other famously not guilty people such as O.J. Simpson, which he did with his trademark humility, grace and poise.

With Trump blocking the White House from sharing relevant documents with his impeachment trials, and Senate leader McConnell denying witnesses a chance to testify Trump does not have to endure unseemly accusations of a sham trial, and questions about ‘obvious guilt’ will not linger, in much the same way former NFL footballer O.J. Simpson’s famous trial also left his spotless reputation and innocence in tact.

“With the acquittal Donald can now enter the Hall of Fame of Definitely Innocent People alongside Simpson, Nixon, R. Kelly, MJ, Prince Andrew, Bill Clinton and cops who unload bullets into the back of unarmed civilians and a whole host of other stand up guys that everybody holds up as decent and honest,” explained one law expert.

“There is no better barometer for innocence than this impeachment acquittal. What ulterior motive could US Republicans possibly have when overseeing a trial on the potential guilt of their friend and boss that could also implicate some of them? The scared right, that American Dream of being answerable to no one is alive and well.”

Reaction to the acquittal has been greeted warmly by Trump’s core supporters who had always insisted their man should quit quid pro quoing the impeachment or whatever it is he was accused of.

However, the acquittal is seen by many as a chance for the country to move on, giving Americans the opportunity to focus more sharply on all the other things they vehemently disagree on before Trump’s predictable reelection and legal challenge to the two-term president limit.