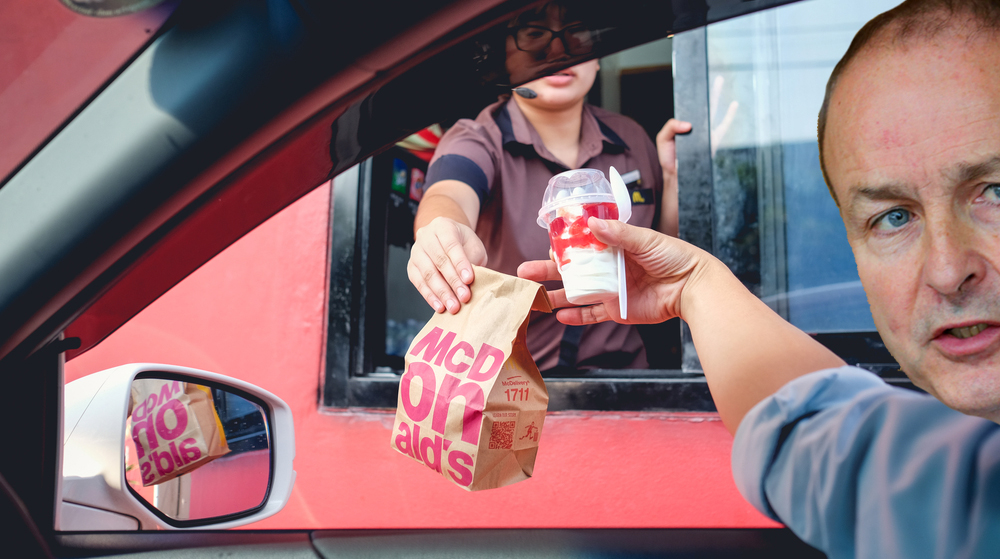 WHILE SINN FÉIN’S increase in popularity has emerged as the story of the election, Fianna Fáil, if polls are to be believed, will emerge with the most seats from the general election and in a bid to increase the likelihood of this happening have promised the nation’s voters McDonald if they behave themselves.

“Yes, now that’s a good electorate,” confirmed Fianna Fáil, back behind the wheel after a 9 year driving ban, “if you’re nice and quiet and obedient, and do as your told on Saturday we promise to spin by McDonald’s on the way home”.

Fianna Fáil deny their policies, much like their rivals, don’t stand up to even the most basic of probing, and refute accusations that they’re up to their old tricks of bribing voters with promises and giveaways that could result in the country’s re-ruination.

“Hey! Less of that guff now in the back,” barked Fianna Fáil, “just behave yourself and don’t be whispering too each other, we can’t hear you. Remember, Happy Meals all round and don’t be opening the door to jump out while the car’s moving, we’ve the child locks on”.

In a move that suggests Fianna Fáil really can’t be trusted nor can they follow through on any of their promises, they claim they can secure enough Happy Meals for everyone, the sort of ones that don’t have any of that boring, shite fruit nonsense and have proper toys, not those educational ones.

“Oh, what specific drive through are we going to? Eh, now, well, don’t worry your little heads there now you just do what you’re told and we’ll take care of the rest,” concluded Fianna Fáil, unable to provide details on the nearest McDonalds or how far away it was.