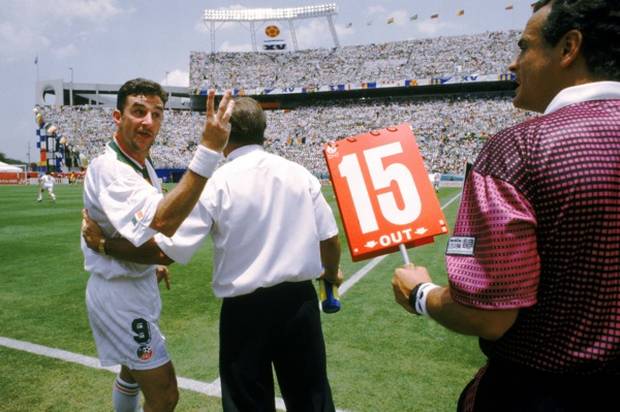 A SLEW of familiar faces has been drafted in to help right the course of the FAI’s stricken ship, including the veteran Republic Of Ireland striker John Aldridge, who will join the boardroom in a ‘bollocking everyone in sight’ role.

Aldridge, 61, is hoping that some of the classic yelling and screaming he showcased in the unforgettable USA ’94 World Cup will finally shake the FAI board out of their current death spiral, where financial issues threaten to capsize the League Of Ireland following a 2019 that can only be described as ‘a ten-nil thrashing’.

Other ROI players include Niall Quinn as deputy chief executive, Paul McGrath who will dole out crunching 10-yard sliding tackles as and when needed, and Steven Staunton, who will stand there with a perplexed look on his face at all times.

“A load of the old lads will hopefully help us get out of this massive hole of debt that we’re in, seeing as how the government aren’t just going to hand over the €18m we asked for,” said a spokesperson for the FAI.

“Already this morning, John Aldridge lived up to his rep as an enforcer in the team. One of us suggested, ‘hey, will we hire John Delaney back in a consultancy role and pay him a huge salary so he can help us get out of the debt problems we racked up when John Delaney was in charge?’, and Aldridge yelled at him for a full hour straight. So that’s working”.

Rumours are swirling that Jack Charlton himself may also be brought back to ‘give it a lash’, which should see Irish soccer return to the dizzy heights of nil-all draws with minnow teams in no time.