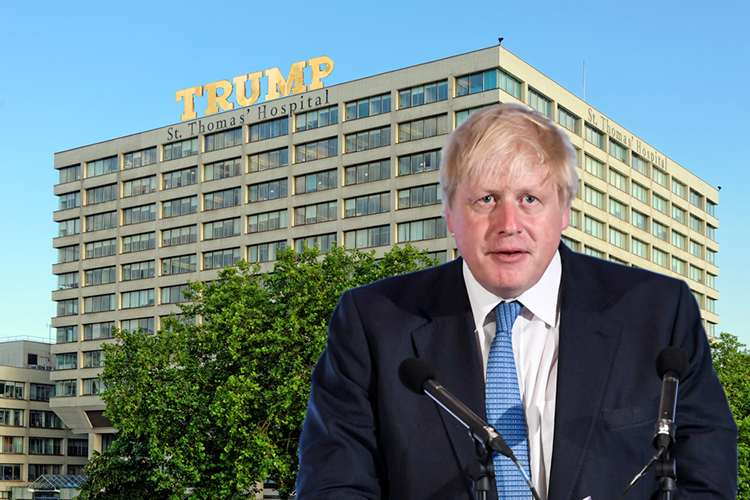 BRITISH PM Boris Johnson had been in the middle of a speech angrily denying claims that his government would sell off the National Health Service to the US when a crane began lowering a ‘Trump’ sign on the roof of St. Thomas’ Hospital in London.

Refuting the contents of the 450 pages of documents leaked from his own government which detailed negotiations dating back several years between the British and US governments, Johnson was left red faced as the unmistakable sound of cheap and gaudy gold-plated metal gently screeched into place on top of what was once a NHS Trust operated hospital.

“I have no intention of selling the NHS off as part of any US trade deal. I’m a man of my word,” Johnson added as a bus load of busty models dressed as nurses were unloaded to replace on duty qualified NHS nurses.

Johnson appealed to journalists to focus their attention on his speech while in the background orderlies dumped out the terminally ill, unable to meet extortionate medical bills, on the side of the road.

The unfolding PR disaster added to a recent catalogue of errors and falsehoods offered up by the Tory leader which included lying about nursing numbers, hospitals planned for construction and 500 other minor major things.

As it seemed a lifetime of pathologically lying was finally catching up on him and the British public finally seeing the Tory party’s blithe indifference to poverty and inequality, a pale and ashen faced Johnson took questions from the media.

“Jeremy Corbyn was in the SS, he refuses to deny that he’s Ivan The Terrible,” shouted one Daily Mail journalist, more a statement than a question about the dismantling of Britain’s free health service.