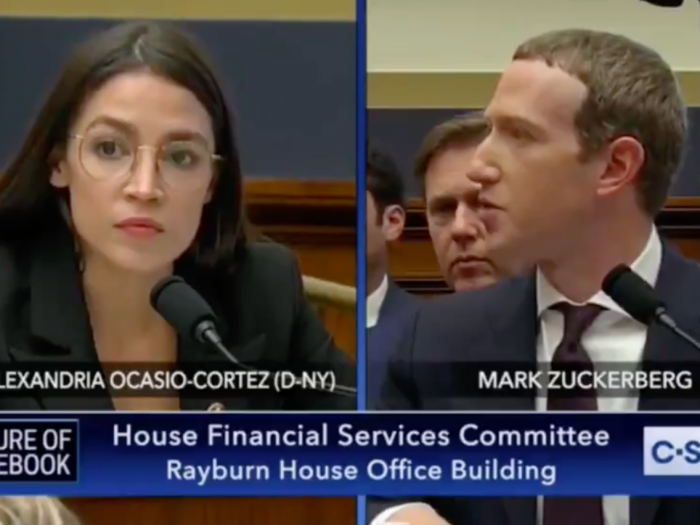 A FURIOUS Mark Zuckerberg has returned to Facebook headquarters after a gruelling grilling at a congressional hearing over his social media platform’s poor policing of political information, and has vowed to make sure Congresswoman Alexandria Ocasio-Cortez spends the rest of her life ‘waiting fucking tables’.

Ocasio-Cortez known as ‘AOC’ took Zuckerberg to task on Facebook’s decision to make political advertisements exempt from fact-checking, a policy that opens the doors to dangerous right-wing propaganda and election tampering, in a session that left the Facebook CEO looking like what some political commentators referred to as ‘a slapped penis’.

Angrily attempting to turn over ping-pong tables in Facebook’s hollowed-out volcano HQ, Zuckerberg ranted that he would show the Congresswoman for The Bronx in New York ‘what election tampering looked like’, before assigning a team of moderators to monitor any mention of AOC on Facebook or Instagram, and report it directly to him.

“First of all, find any examples of the video of her making me look like a child in the House Of Representatives, and delete the account that posted it” yelled Zuckerberg, hyperventilating into a brown paper bag.

“Then give a free pass to any Republican who posts anything about her. I don’t care what it is, they can say she smuggles plutonium to China or she once bit the head off a Catholic schoolchild, anything. Any pro-Ocasio-Cortez posts, I want them down within the minute they’re posted. Choke her reach. Choke her. Choke ’em all! Nobody makes Mark Zuckerberg look like an idiot! No-one!”.

The Anti-AOC measures have come into effect immediately, and the effects have already managed to stoke up anti-Democratic sentiment among Facebook’s remaining 87 users.