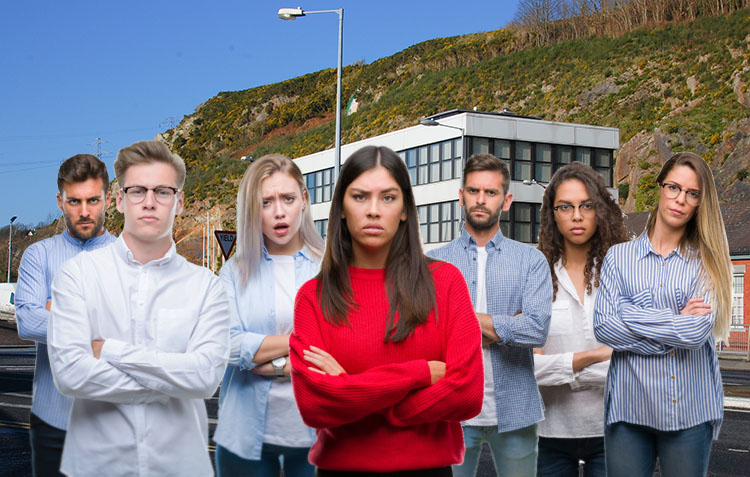 SICK of being rode left, right and centre and being left down by years of empty promises from consecutive governments, the county of Waterford and surrounding regions stood in unison today in a bid to make sure the North Quays development continues following a snag with funding for the relocation of the city’s main train hub, Plunkett Station.

“Where’s our fucking money, boi?” the county shouted in the general direction of the secretary general’s in transport & planning departments based in Dublin, “this is the last hurdle and you’re fucking it up… don’t cross us or we’ll batter all you shower of bastards in the next election, swear to fuck”.

Plunkett Station, which has been deemed ‘dysfunctional’ by Waterford Council’s own chief executive due to no connectivity with cycle or bus lanes and has a cliff face that is preventing it from using two of its three platforms, is the main obstacle holding up the creation of 6,500 jobs for the region.

“If we deliver this, it proves affordable housing, sustainability, joined-up thinking & better city living is possible outside the pale, which terrifies us,” a spokesperson for the secretary general for transport explained the situation, while also admitting to having no idea where Waterford is on the map, “maybe they would like a wider road to Dublin – it would be a shame to lose out on all those culchies paying extortionate rents here and moving home to wherever Waterford is”.

Despite securing the North Quays development, an airport extension, pedestrian bridge, and hopefully University status, Waterford now remains in limbo once again as people in Dublin decide the city’s fate.

“Yeah, we probably should have voted for our own directly-elected Mayor that time so they could take care of things instead of letting gobshites in Dublin rule our city,” the county humbly admitted, now sharpening its knives.