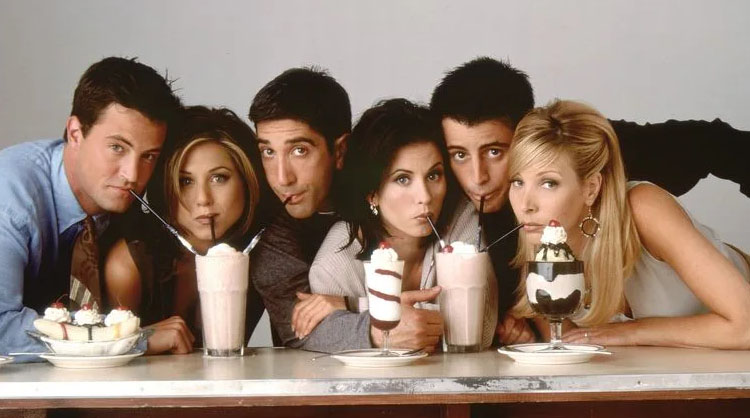 IT may be hard to believe that it’s been 25 years since the sitcom sensation Friends hit our screens, but it’s almost equally as hard to believe that such a beloved show hasn’t made a return to the airwaves since it wrapped up in 2004, however, it’s not for lack of effort.

While our screens have remained Joey, Ross, Chandler, Phoebe, Monica and Rachel-less all this time, the producers of the hit TV show have worked tirelessly to tempt the principle actors back in front of the cameras for everything, from a whole new season of the show, to a one-off reunion special and even a movie; coming incredibly close to pulling it off with a 2014 special that has come to be known in insider circles as ‘The One We Don’t Talk About’.

Intended as a feature-length episode to commemorate the ten-year anniversary of the last episode of Friends, the special got as far as the scripting stage, and took an edgier, grittier look at thirty-something life in New York than fans were used to.

Taking inspiration from the subtle, nuanced humour of the then-hot Louis CK show ‘Louie’, as well as pandering to the principle actors desires to not re-tread the same old storylines and ‘really do some acting’, the special took the titular friends into some dark territory, as witnessed in the very first scene.

RAIN lashes on a HEADSTONE. We pan back to see ROSS, kneeling in the mud.

We see a shot of the HEADSTONE.

“As the episode rolled on we learned that Ben had been killed during a school shooting. But in the third act, we learn that Ben was in fact the shooter himself, with Ross blaming himself for allowing his son to be brought up in a less-than-traditional setting, ” said producer Mark Keelerberg, speaking at a special Friends reunion in New York at the weekend.

“And then that became this whole discussion about same-sex couples and their abilities to raise kids… look, there’s a reason this episode didn’t get made. We were trying to marry two very different elements; the old-school casual homophobia that the original series was known for, and the then-brewing Trumpian Republicanism that has come to define America over the last five years – this was evident in later scenes where 9/11 was referenced in Friends for the first time”.

INT: STARBUCKS [editor’s note: the infamous Central Perk has been replaced by Starbucks, to mirror the coffee giant’s monopoly across the world. But fear not; Gunther still works there, and there’s a very funny running joke where he keeps getting Ross’ name wrong on the cups]

MONICA is angrily talking to PHOEBE

MONICA: Phoebe, I heard your latest podcast. How can you possibly say that the Jews did 9/11? How can you believe these things?

MONICA: What do you mean?

PHOEBE: We never talked about it! We lost friends that day! That hot fireman I dated for a while died in the North tower! We just acted like it never happened!

MONICA: That doesn’t mean you can go stoking up hatred on your right-wing livestream! I’m Jewish!

PHOEBE: That’s right Monica, and how many of your people did you lose on 9/11? None! Seem a bit odd to you?!

CHANDLER has zoned out of this conversation. From his POV we see that he has been focused on the TAUGHT HAUNCHES of an attractive WAITER.

CHANDLER (sadly, to self): Could I BE living more of a lie?

Keen to sew up all elements of the Friends-verse, the episode brings Joey Tribbiani back from LA, where his short-lived spin-off sitcom Joey had shown the character achieve a modicum of movie success. Producer Keelerberg adds that while actor Matt LeBlanc was delighted to reprise his most famous role, he wasn’t too happy with where the script took the character.

“Joey gets MeToo’ed, like, HARD” sighs Keelerberg, reaching the point in the story where the wheels began to come off the wagon and the episode fell out of favour with the actors.

“There was a great scene with this actress that Joey had promised a role in a movie too, if only she slept with him, and she’s just screaming at him in front of everyone, pouring her heart out in this aching one-take geyser of emotion. And then you see it from Joey’s angle and he’s been distracted by half a pizza on a table the whole time. We just thought it was hilarious, but then the whole MeToo thing actually did kick off, and you couldn’t make jokes about that kind of thing. In fact, the whole script started to get picked apart. Jennifer Aniston refused to appear unless we cut the scene where Rachel goes on a trip to a factory which supplies clothes to her fashion label”.

RACHEL carefully walks through row after row of young women operating sewing machines, guided by a woman who speaks NO ENGLISH

We hear a SCREAM. A worker has mauled her ARM in a SEWING MACHINE

RACHEL: Scratch that, THERE goes the fall line.

With cameos from a now-rabid Marcel the monkey and Giovanni Ribisi, reprising his role as Phoebe’s brother Frank, fresh from his second tour in Iraq and PTSD’d to bits, Friends 2014 was set to be a complicated and morally suspect addition to the mythology, leading to cold feet from all involved and the eventual cancellation of the project.

“If there was one thing that crippled the project, it was the lack of diversity in the cast” sighs Keelerberg.

“In 1994 when the show came out first, you could show 6 attractive white people living affluently in New York, but in 2014 that was a real no-no. So we had to go back through the drafts and oar in some more people of colour, and then that lead on to conversations about how comedy had changed in 20 years, so a lot of the jokes from Friends that poked fun at mental illness, transgendered people, gay people, and cats that smell bad, well, they all wouldn’t play in 2014. For example, you couldn’t do a song about a smelly cat; we’d have PETA up our ass, so it was decided to just leave things as they were, and the script just disappeared”.

Although the door is closed on a Friends reunion, it is only a matter of time before the inevitable reboot of the classic show, with whispers in the industry suggesting that the number of friends may be changed from 6 to 8, as the number 6 is deemed to be ‘too triggering’ for some of today’s generation.