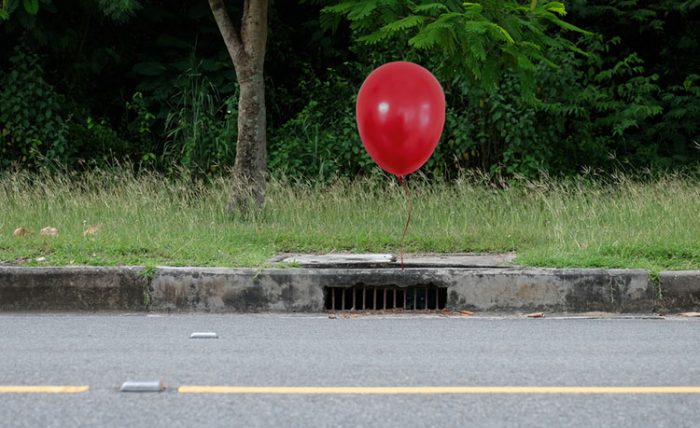 THE WARNING, issued by Met Éireann comes into affect in Derry and other locations across the island of Ireland from the 6th of September and is set to last for weeks.

While the meteorological service rarely issues non-weather based warnings it is believed bright red balloons are associated with torrential rains and can lead to people finding themselves drawn towards sewers, which is never a good thing.

“Drains, sewers or what is it posh people call them again… shores? Whatever you call them, steer well clear especially if you see red balloons. Avoid floatation devices too,” confirmed a spokesperson for Met Éireann.

“If you find yourself near a sewer and you hear any clownish chuckling, the advice is simple: you’re on your own loser,” added the spokesperson, who we could have sworn was doing something seriously creepy when our backs were turned.

The news has been troubling for some locals as sightings of red balloons have caused disturbing flashbacks to incidents from their childhoods.

“Probably flashbacks to fun stuff like off-colour juvenile pranks and jokes, first kisses or going for swims in quarries, nothing sinister,” concluded the spokesperson.

Elsewhere, cinemas have issued an unrelated warning to boyfriends intending to take their other halves to the cinema, explaining the risk of having your hand squeezed to the point of shattering every finger bone you have remains high.