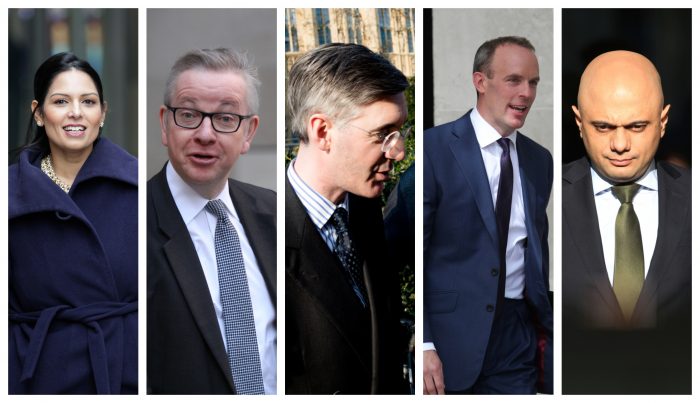 CLEARLY not happy with the current pace of the disintegration of the United Kingdom, newly installed prime minister Boris Johnson quickly went about promoting to his cabinet those individuals most capable of hastily accelerating the process of its demise.

With Priti Patel, Michael Gove, Dominic Raab, Jacob Rees Mogg and Gavin Williamson all earning a spot in Johnson’s cabinet, it is a veritable smorgasbord of amoral fantasists with the collective brainpower of a battery powered egg.

“It’s like the shittest Avengers movie possible, but instead of saving the world their purpose is to make you lose the will to live,” shared one member of the public who watched the news through the gaps between their fingers.

“To give Boris some credit; what an impressively diverse array of soul-sucking vampires who will make life tougher for the most vulnerable people in society,” remarked one political expert.

Those who doubted Johnson’s ability to elevate only the most undeserving, self-serving and morally hollow people to cabinet admitted their error as they surveyed some of his appointments.

Priti Patel is most famous for advocating the death penalty, being fired as a minister after attempting to conduct back door deals with the Israeli government and suggesting threatening Ireland with starvation during Brexit negotiations, Dominic Raab had admitted to not understanding the concept of trade and the sea during his time as Brexit Minister.

Jacob Rees Mogg is homophobic and a haunted painting, Michael Gove called the Good Friday Agreement a ‘moral stain’ and compared it to appeasing the Nazis, also broke the law during EU Referendum as co-chair of the Leave campaign, Grant Scapps a lied about having second job whilst being an MP and practising business under a pseudonym.

Gavin Williamson was fired for leaking details of a National Security Meeting when Minister for Defence, Sajid Javid’s own immigration policies would have seen his own father refused entry to Britain and Esther McVey said poor people only use food banks because they spend their money on smartphones.

While vacancies in the positions of Minister for Casual Racism, Minister for Economic Disaster and Minister for Creeping Toward the Far Right have yet to be filled, many political commentators are suggesting Johnson’s new cabinet heralds a golden age for amoral and incompetent bastards.

In a bid to bolster their reputations, those Tory MPs not appointed to cabinet have updated their CVs on LinkedIn with a giant neon sign flashing the words ‘not quite reprehensible enough to make it into Johnson’s cabinet’.