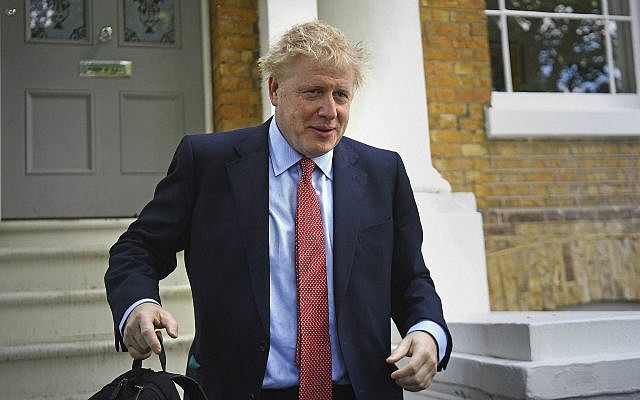 THIS PAST weekend saw Tory leadership favourite Boris Johnson being systematically targeted by the gutter press who will stop at nothing in their campaign to just sit back and let him fuck it up all by himself.

Before pulling out from the Sky News debate, and long after failing to pull out of any woman able to produce a child, Boris Johnson was hitting the headlines after police were called to a ‘domestic incident’ at the home of his partner, Carrie Symonds.

WWN has navigated through the mist cast by the puerile left-wing tabloid press to get to the innocent truth of just exactly what happened:

“You have no care for money or anything” – these were just some of the words uttered by Johnson’s partner Symonds, but the full context is what’s truly important. Symonds was shouting at Johnson because as Prime Minister he said he would wipe out the national debt, reinvest in the NHS to the tune of €40 billion, re-nationalise rail companies and erase poverty. But no, you don’t see the biased press reporting that, do you?

“Get off my fucking laptop” – Johnson is heard to shout, however, a man’s internet search history is the most private and sacred of things and Symonds, in another world with just laws, would be sentenced to life in prison for even attempting to get near a man’s laptop.

“Get off me” – shouted Symonds, in a harmless reenactment of a scene from a Carry On movie probably.

Clear banging and crashing sounds were heard coming from the apartment but we now know Johnson was in the middle of receiving cymbols and drumming lesson in the same room he stores piles of fine china.

“You just don’t care for anything because you’re spoilt” – Symonds is also heard to say on the recording, but Context. Is. Everything. She also went on to say “does your asshole get jealous of all the shit that comes out of your mouth? You couldn’t manage a fucking lighthouse, Boris. I know you were dropped on your head as a child but could you ring your parents, I want an exact number. You’re about as much use as a chocolate teapot. You couldn’t be trusted to find sand in a desert.

“Making love to you is like watching Coronation Street, you don’t want to do it but when there’s fuck all else on it helps to pass the time. Why can’t you act like the dog you are and find a shed to go slink under and die. In case this isn’t sinking into your wafer thing skull, and I think you’re an irredeemable twat and you have the intellectual capacity of a crab.”

The Guardian chose to just report on a section of the full quote to make it look a certain way. Shame on them. The Remain nutjobs at the Marxist paper also left out the fact that we’re probably all living in a simulation so technically none of this truly took place. Johnson’s neighbours were later discovered to be members of the Soviet loving Cambridge Spy Ring.

The BBC also reported on the incident which is laughable because Jimmy Saville worked there once. Need we say more.

To suggest domestic violence occurs in Tory voters homes is ludicrous, it only happens among working class savages.

Clear evidence the public have no interest in this nonsense and just want Boris to get on with the business of securing the hardest, most economically devastating Brexit possible came in the form of one tweet from a Russian bot with 4 followers that said “So what if Boris had a domestic. Still the man for the job”. Proof we need to move on.

Elsewhere, fellow Tory leader candidate Jeremy Hunt was caught out by his neighbours who obtained a disturbing recording of a curiously monotone, unaggressive and excruciatingly boring Hunt say “I love you dearest” at an acceptable volume level.