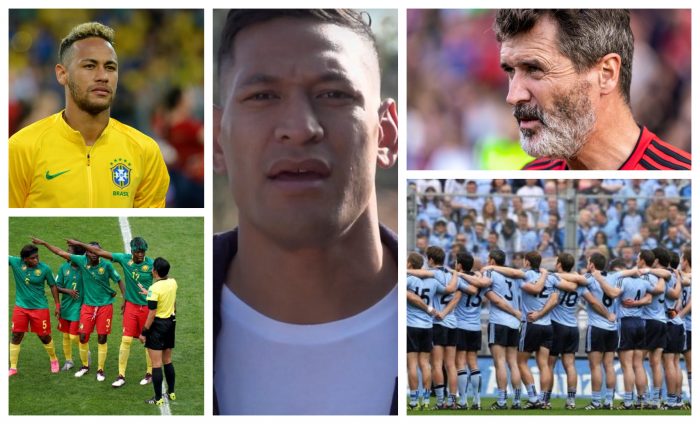 ANOTHER WEEKEND, another action-packed 48 hours filled with sporting delight. WWN was there for every kick of a ball, stride of a leg, puff of cheeks, vomit on side of pitch because you decided to go out the night before and really don’t have the lungs for Sunday league anymore.

Catch up with WWN Sports, we’ve got all your sport action right here:

Stating his desire to return to management, Keane would be the ideal man to whip some people into shape; the staff in Starbucks who can’t spell names correctly, or turning to a life as a chef where losing your temper and screaming and shouting at people is viewed as an asset.

The women’s world cup has roared into the knockout phase but descended into farce and controversy during England’s 3-0 victory over Cameroon. Cameroon’s players appeared to stage an on-field strike, refusing to play on after the awarding of England’s second goal via VAR.

Some people have suggested this was a pre-planned strike after the players began carrying placards “no way, we won’t play”, “no play without VAR representation” and “Phil Neville, really? Was no one else available?”

Transfer watch: Neymar is set to rejoin Barcelona in a deal reportedly worth in excess of €150 million or in plain terms: one-third of a Wes Hoolahan.

In GAA, Dublin emerged unlikely Leinster football champions this year. The GAA, seeking to save time, handed over the trophy to Dublin before their match against Meath, which saw the Dubs run out winners by a margin so large the actual number hasn’t been invented yet.

Elsewhere provincial championships threw up yet more upsets as Donegal and Kerry triumphed against the odds. Fans have been put on high alert for a ‘Joe Brolly being controversial for the sake of it’ newspaper column.

The cricket World Cup is in full flow, but, c’mon, nobody watches that.

Openly homophobic Australian rugby player Israel Falou made headlines again after the launch of a GoFundMe campaign aimed at raising funds for his legal defence after having his contract terminated for being openly homophobic.

Falou’s pleading for funds appeared alongside campaigns from desperate parents seeking money for lifesaving operations for their sick children, leading people to observe that perhaps the ‘devout Christian’ Falou is kind of a dick.