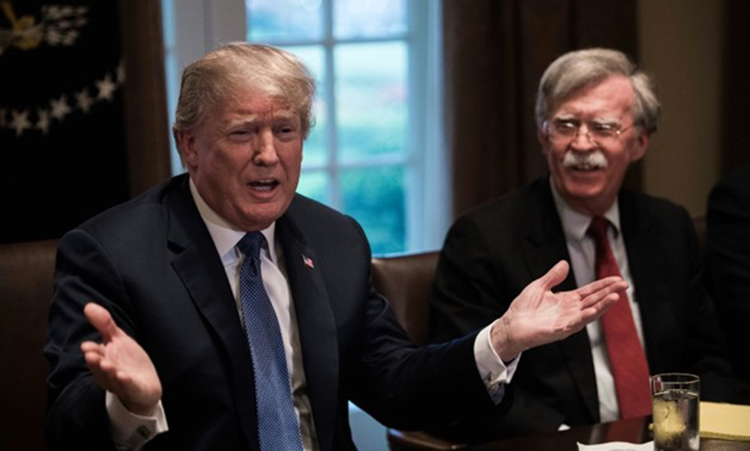 DEFENDING his cautious approach to the downing of a military surveillance drone over Iranian waters last week, US President Donald Trump reassured National Security Adviser John Bolton that he will definitely war next term and that he just “isn’t feeling Iran at the moment”.

Calling off a military airstrike on Thursday against Iran at the last minute, the President said he had a busy schedule of golf and late night Twitter rants lined up and couldn’t fully commit to a war right now, but to “bare with him”.

“This was exciting. It really was. Drone shot down. An international incident. We should have warred. I get it” Mr. Trump told the assembled media at the White House, flanked by unimpressed Mark Twain descendant, John Bolton.

“Venezuela was boring; regime changes are old,” added the president defending his sudden disinterest in the South American country, “I’m looking for a good war. The best. Something unique. Trust me, next term we’ll war hugely. I don’t know with who yet. Maybe China, who knows. Wait until you see this war… oh boy”.

Confusingly, news that a war and loss of innocent life is not imminent has been criticised by left-leaning media outlets. Slamming the lack of response over the downed drone, former US President Barack Obama called Donald Trump weak and unable to make the tough decisions needed for leadership.

“I would have blitzed Iran for killing droney,” said a teary eyed Obama, now caressing an image of the $118 million RQ-4A Global Hawk BAMS-D, “It was just spying for targets to strike, nothing else. Trump is a coward for not ordering young men and women to kill innocent people”.