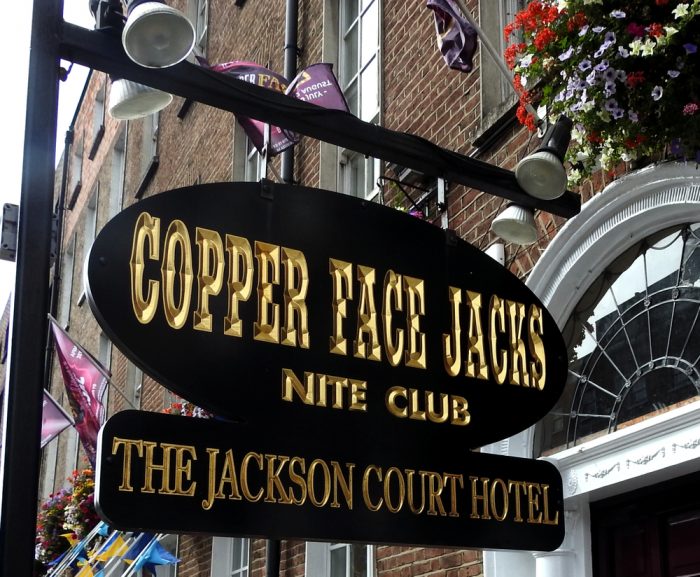 WWN’s investigative reporting unit descended on what the Irish media believes is Ireland’s only nightclub to see what all the fuss is about and if it really lives up to the hype. We sent seasoned journo Gavin Gorty up to Dublin to investigate:

In order to properly enjoy Coppers as if I were one of the seasoned regulars, I would have to embody them completely. It was no use only giving this the half-hearted approach, there’s nothing half-hearted about Coppers; the cloakroom profits, the projectile vomiting mid-kissing, giving birth on the dancefloor, lads ‘letting off steam’.

Tough sacrifices had to be made to achieve this. I said goodbye to Sandra and our marriage, as I would need to be single to truly fulfill my journalistic obligations. It had been a good 14 years, but Sandra understood. At least I think she did, it was too hard to understand her over her crying. Our three children took the news a little better.

I would also have to retrain as a nurse. I couldn’t rightfully stroll into Ireland’s most popular hot spot without inhabiting a regular customer’s life completely. All that was left was the name change; would it be Aoife, Ciara or Siobhan? No, I would be all three, I was now Aoibhaniara.

That also meant pursuing the hobbies and interests of Coppers attendees. After some cursory research it appeared a Copperite’s main hobbies were extensive and included a) going to Coppers, and b) making this the key part of their personality.

I was slowly making progress. Single and now a nurse after years of study, I was 4 years behind on my initial deadline for the article and fired by WWN for not turning up for 48 months in a row, but now I’d put in the hard work, I’d won an All-Ireland Camogie medal, I could now find out if Coppers is all it’s cracked up to be.

Something called ‘pre-drinking’ is vitally important to Irish night life and would be integral to my making the most of the night ahead.

I drank a €4 bottle of Lidl wine which claimed to be from a vineyard in Galway, but more importantly had a higher percentage of alcohol in it than rival wines/piss water. After drinking too much in too short a time-frame, I had lost all motor functions and had become very loud and reacted very excitedly to the sound of songs I liked being played on the radio. I was knocking this out of the park!

Unsure if casual cocaine consumption was as prevalent on the premises as everywhere else in Dublin I only did a gram.

The queue was long and full of immensely drunk people swaying from side to side, but in a scene like something from Animal Planet, they collectively swayed in such a way that they propped one another upright.

I skipped the chaos of the queue though as the Coppers gold card I had paid €12,000 for on the black market was all I needed and once I stepped across the threshold I was immediately hit with its transformative power, and I finally believed the immense hype.

It had a bar which served alcohol. No wait, several bars.
It had a speaker system which played popular songs.
It had people wearing GAA jerseys.
Someone vomited directly into my pint.
Where else in Ireland would such a unique experience be on offer?
What sort of enchanted palace of explosive joy had I just entered?

It wasn’t long before I ordered several more drinks but I was missing meeting a guard who I could romantic entangled myself with and become emotionally distant from 10 years into a marriage we both regretted if we were being honest. I politely went around screaming in people’s faces ‘are you a guard?’ but to no avail.

Back at the police station, I was so entranced by the guard’s steely blue gaze none of the charges he was leveling at me sank in. My offer of providing him with several midfield’s worth of children didn’t seem to register.

I was told to ‘sleep it off’ in a cell. Sleep what off? The crazy ecstasy of my night in Coppers? No, this natural high would stay with me the rest of life. Okay, admittedly I had a headache from the fight I got into with that lovely girls I made friends with in the toilets. Sleep it was.

I awoke to Sandra arriving at the station to drive me home. In the 4 years after I took on this assignment Sandra has remarried a man called Simon or as the children called him ‘Dad’.

“Sort your life out Gavin,” Sandra shouted at me. I may have a stiletto sticking out of my head, and okay I didn’t bag a guard, but really it was astonishing that Sandra could look at me after the night I had and think it was I that needed to get it together.

After much reflection and thinking on why Sandra was so wrong, I have chosen to continue my life as a Coppers regular and now live there, sleeping under a pile of discarded coats left to the side of the dancefloor.