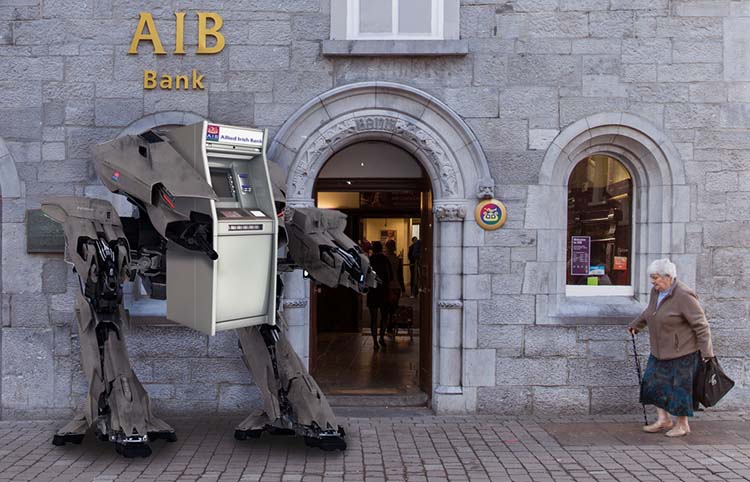 IRISH banking institution AIB has today unveiled a brand new heavily armed ATM robot which they say will combat a spate of robberies that have been plaguing banks around the country.

The new ATM 3000 comes equipped with a .50 calibre automatic assault cannon, which can pierce through thick reinforced steel and even JCB shovels and is due to be launched nationwide early next week.

“Following some minor glitches in lab testing, we’ve finally managed to sign off on this new armed ATM machine and look forward to seeing it in action,” AIB spokesman Jonathan Holden told a congregation of press and photographers outside a Galway branch earlier today after unveiling the banks latest security measure.

However, in trial tests, subjects wearing headgear triggered the ATM 3000’s sensors into combat mode and were accidentally obliterated by the robot, forcing the bank to issue a warning for customers wishing to use the new machines.

“Unfortunately, there will be teething problems until people realise that if they don’t take off their helmets or headgear they will end up as steaming piles of human mince, but there will be plenty of signs to remind customers of this, so this little glitch shouldn’t be a problem”.

As part of the new security measures, the new ATM will also engage subjects who input their pin incorrectly 3 times, thus acting as a deterrent to criminals trying to use stolen cards.

“We don’t predict any issues with this new armed ATM,” AIB concluded.