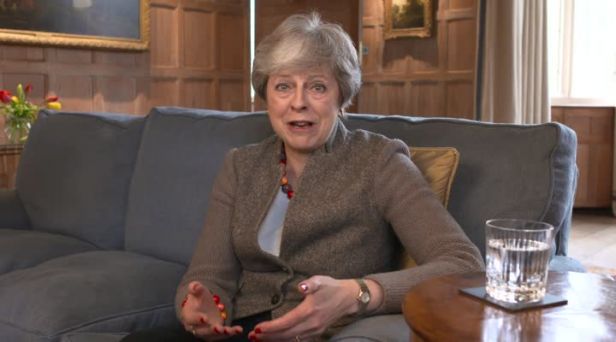 WHAT was first presumed to be a terrifying video of a robot spectacularly failing the Turing test has now been confirmed as Theresa May trying to update the British people on how she is mismanaging all aspects of Brexit.

Keen-eyed viewers have already identified a number of hidden messages May conveyed to the public in a bid to send real information via subtle gestures and objects. WWN has compiled all the subtle codified meanings which reveal sinister goings on, and the real truth behind handling of Brexit:

The video starts with May taking in a deep breath of air. Here, May is clearly breathing in heavily on the off chance there is a deadly strain of disease in the air. By breathing it in, May is hoping to contract something deadly, thus freeing herself from her responsibilities.

Interestingly, May speaks for the entirety of the video, and careful analysis of the content of her speech reveals for the very first time that she might have absolutely no fucking clue as to what she’s doing.

No Jeremy Corbyn in the video is a clear indication he is laying a wreath at the graveside of Josef Stalin or re-murdering Princess Diana.

May’s glass of water is 3/4 full in a bid to show her optimistic outlook on just how many poor people could die.

Debt collectors appearing halfway through the video to repossess the couch Downing Street has failed to maintain repayments on is evidence of the UK economy’s rude health.

Her matching multi-coloured necklace and bracelet indicates a strong immigration policy and is meant to strike fear into people who live in Britain legally, but happen to be the ‘wrong colour’ according to the Home Office’s Windrush policy.

Towards the end when May begins talking backwards in Latin and her head turns 360 degrees is a pre-existing condition and nothing to be worried about.