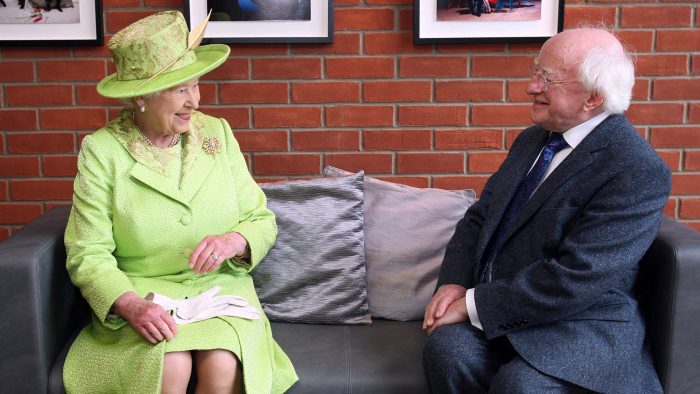 CODE-NAMED ‘Operation Honeytrap’, the Irish government have launched their most seductive weapon in a bid to avert a hard Brexit in the form of President Michael D Higgins.

Embarking on a ‘routine visit’ to the UK, Irish president Michael D. Higgins is in fact on a clandestine mission to get into the Queen’s nickers and convincing her to intervene in the democratic process of her country and cancel Brexit completely.

In documents seen by WWN the president, referred to only by his code-name ‘Pocket Rocket’, will “have a private audience with the Queen, at which point he is under strict instructions to say ‘is it just me or is it hot in here?’ before taking his top off, showcasing his envious physique before later offering the Queen a massage while he recites some poetry”.

This attempt to cancel Brexit has been months in the making with Higgins ‘working his asset (the Queen)’ by sending private Instagram DMs and WhatsApp messages to the Queen which WWN can exclusively reveal for the first time.

Talking in flirty code, Higgins tells the Queen he is looking forward to bringing his OBE (obscenely big erection) into Buckingham Palace (her vagina).

Replying breathlessly the Queen recorded a WhatsApp audio message which stated “One can’t quit you, Michael. I want you to plunder my 6 counties”. Other messages are simply too sexually explicit to reproduce here.

British politicians had spent much of the weekend accusing the Irish government of being the masterminds behind forcing the British government into canceling their no-deal Brexit ferry contract with a company that actually owns no ferries, but in reality the Irish government’s subterfuge runs much deeper and dastardly than ever expected.

“Once Pocket Rocket starts reciting some Yeats or speaking in Irish, The Queen doesn’t stand a chance,” shared one government aide, who confirmed that President Higgins spent much of last week memorising and practising the entire Kama Sutra.