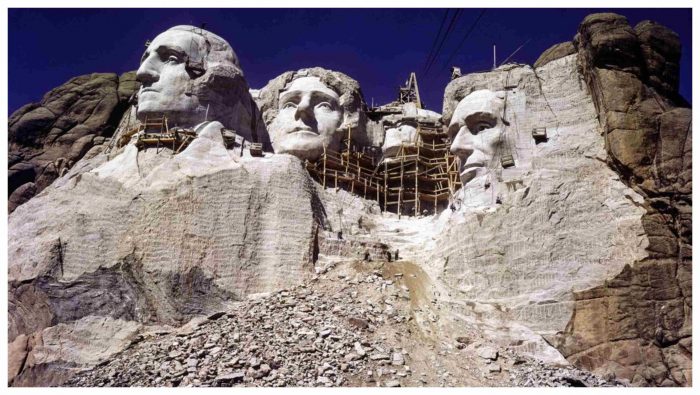 A TEAM of 97 expert sculptors with over 2,500 years of experience have begun carving the fifth and arguably most controversial figure into the Black Hill mountains of South Dakota, WWN can exclusively reveal.

Many critics stated the government shutdown could halt the face of US President Donald Trump joining the faces of presidents Lincoln, Washington, Roosevelt and Jefferson on Mount Rushmore, however the president hired Mexican workers to circumvent the shutdown and begin the process of his face taking its place alongside the revered presidents of yore.

While Trump denies putting his own name forward some months ago for the honour of becoming the fifth presidential face on the facade of the mountains which serve as a major tourist attraction, he has said he was humbled by the beginning of the carving.

Sculptors on the ground in South Dakota, including Manuel Domingez have spoken about the monumental task of updating the iconic monument.

“The hair is the most difficult to replicate, it could take months to perfect,” explained the Mexican sculptor, hired on a temporary visa alongside 96 other Mexican sculptors who won the contract after White House officials sought to drive the cost of the project down.

“We think a total cost of $896 million dollars is a fair price for honouring the president and all voters would agree. We made a slight saving on personnel by firing all the US workers but this is America after all, so it’s great to be able to achieve this,” confirmed White House spokesperson Sarah Sanders.

Sanders denied a shell company set up by Trump’s children in a tax haven would receive a ‘franchise fee’ for the construction and maintenance of the face.