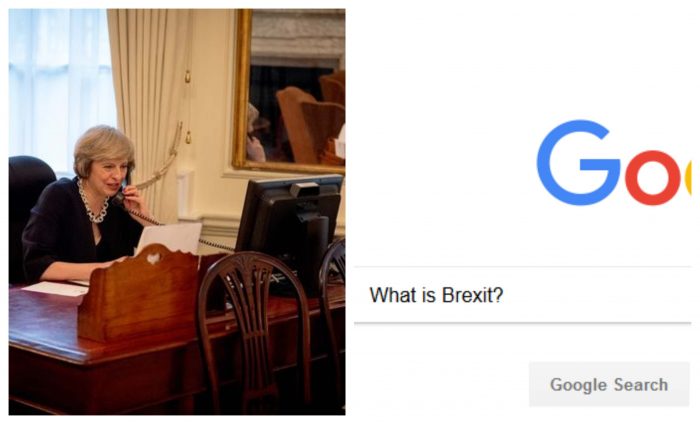 AFTER TYPING ‘What is a Brexit?’ into Google hundreds of times and finding it hard to understand the information provided, British Prime Minister Theresa May is now putting out an open call to anyone who can help in understanding the strange phenomenon that is ‘Brexit’.

Possessing the inability to understand what an Article 50 actually is, along with being unable to cope with calling a snap election which resulted in Northern Ireland’s DUP party officially in charge of all major political decisions across Britain, May is rumoured to be desperate for help.

“If only some experts in trade, manufacturing, IT, aviation, food, import/export, immigration and the Good Friday Agreement would have come forward to help inform our negotiating positions we’d know what a Brexit is, but sadly no one seems willing to give straightforward advice and expertise,” the Tory leader lamented, now some 2 years into a process she has absolutely no understanding of.

Against all odds it appeared the EU leaders were close to inking a final Brexit deal on Sunday before being scuppered once officials from the British government arrived.

“No hang on, I’ll crack this,” May said typing ‘What is a Brexit?’ into Google one last time.

“Oh this thing is bloody useless,” a frustrated May scoffed when Google suggested “did you mean ‘we’ve made a massive, colossal fuck up and are about to ruin everything but are too proud to admit we’ve made a mistake?'”

May’s wider appeal for from individuals who understand Brexit will require a quick response from willing experts as the final date of March 29th 2019 fast approaches.

“We desperately need to find out what a Brexit means which is why I have instructed all suggestions to be delivered to my office via wingless carrier pigeons,” confirmed May highlighting yet again the sort of exemplary decision making which has kept her in the role of Prime Minister for so long.

Elsewhere, as we approach Halloween, DUP leader Arlene Foster has been pictured on a broom flying over Westminster cackling heartily while shouting “I own you all”.