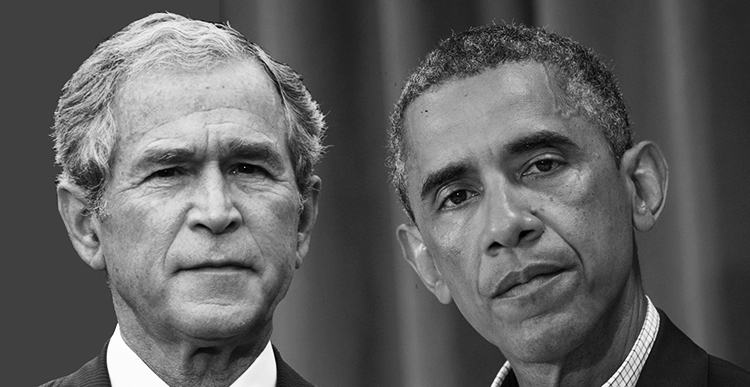 IN A RARE joint-rebuke of a sitting US president, former presidents George W. Bush and Barack Obama spoke out against President Trump’s treatment of families crossing the border into the US seeking refuge, their criticism of the policy echoing the outrage and dismay of millions of Americans.

WWN has reproduced sections of the incendiary criticism which sees the two former presidents lash out and fondly recall a time when the USA was still the US that all its citizens knew and loved.

“Barack here folks, I know, like me, you find the recent news reports and the images of children torn from their parents pretty tough. My policies had families interned together, which is super humane, I know it’s a tough one to swallow because Beyoncé posed in photos with me, but it’s true and human rights groups kept taking me to court over it. It was annoying. But it is very, very different from Trump. In Trump, I see policies that takes us further away from who we are as Americans.

“We, who value equality and freedoms, are in tough times. I’m proud of a different America, an America of the very recent past which rejected this sort of blind hate of immigrants, and instead favoured drone bombing innocent children in the Middle East. In fact, I changed the law so innocent men, who I classed as aged 16 and above, could just be called ‘terrorists’ so I could keep civilian casualty numbers artificially low. No seriously, check it up. I miss that America as much as you do. That’s the America we all want back,” Obama shared in his portion of the statement, sure to finally push the Trump administration to the brink.

“Old Georgie B here. Like me, you remember 2003 as a different, better time for American values. God, I hardly recognise our great land now it is under the guidance of someone who himself is deeply misguided. Back in 2003, spurious claims of weapons of mass destruction in Iraq ultimately lead to the deaths of 3% of its total population. Yup, read that back, as much as 3%, according to some estimates, but I look around now and I’m just sick to my stomach to see the little boys and girls being caged,” read a portion of the statement which was written by George W. Bush.

“Where is the America we know and love? I hesitated when agreeing to write this statement with Barack, but by God it’s needed. In my Dad’s time and the time of Ronald Regan you could recognise America, and its values. Now, you gotta ask yourself what do we value at all? Kids, in cages? Hell no, we need to get back to those values of the 80s, when a president could technically commit treason by selling weapons to Iran and fund terrorists in Nicaragua all behind the backs of the American people. That’s the America I know and love. Secret bombings of Cambodia and Laos, killing kids there. God, what’s happened to us at all? We’ve lost our way in 2018,” Bush added in a letter dripping with well intentioned patriotism.