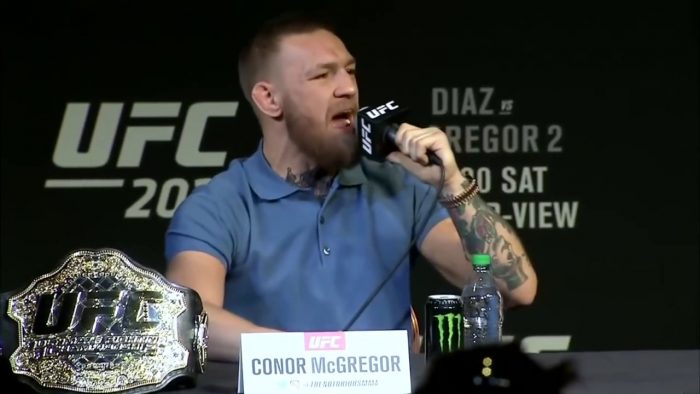 THE merchandising department of the UFC is today working hard to remove the title ‘Notorious’ from all t-shirts, posters and souvenirs relating to Conor McGregor, after a bizarre series of events in which the acclaimed fighter brought the sport into more disrepute than usual.

British star McGregor, known for his colourful outbursts and uncanny ability to make standing people lie down, is currently facing charges in New York after storming a UFC media event with a gang of associates, and attacking a busload of MMA stars in what is being described as either a publicity stunt cooked up by UFC chiefs that got out of hand, or ‘a cunt acting like a cunt’.

Believed to be under the influence of huge doses of Conor McGregor at the time, Conor McGregor’s actions were derided by UFC chief Dana White with a more-or-less straight face, with the rest of the world deciding that the once-tolerated superstar had moved completely into the realms of being utterly ridiculous.

“‘The ridiculous Conor McGregor’ is way more accurate right now,” said a life-long McGregor fan, who can’t even muster the energy to roll out the ‘five years ago he was one the dole and living on his mam’s couch’ line.

“$100m dollars buys you a lot of things, but it doesn’t seem to buy you class, sense, or the ability to know when you’re being a fucking idiot. It’s a damn shame, because what this world really needed was a role model, someone we could look up to, someone who can, you know, violently reduce another human being to a bloody stump, but in a way that was admirable. Not this shit”.

Meanwhile a New York judge has reacted to McGregor’s ‘you’ll do fuckin’ nothing’ attitude to his charges with the fact that ‘no, the law will do fuckin’ something’.