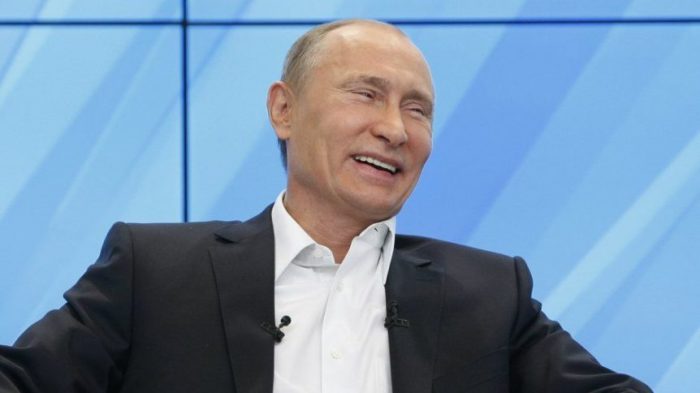 CALLED on by British prime minister Theresa May to explain how a former Russian spy was poisoned by the nerve agent Novichok on British soil, Vladimir Putin confirmed he would do just that after he stopped laughing.

With his shoulders rocking back and forth in convulsions, Putin, along with senior Russian officials spent much of this morning watching replays of Theresa May’s performance in parliament in which she appeared to suggest the British government was in some way able to demand answers of Russia.

“A lame duck leader, in the middle of waiting for a ticking economic time bomb known as Brexit, which they made themselves, to blow up thinks she can get answers from Vladimir. Honestly, I used to think Russian and English humour was very different, but this is hilarious,” remarked one close Putin aide, who had visibly wet his pants from sustained laughter.

“Of course we did it you idiots. There. Now. We’ve saved you a lot of time investigating and making pathetic requests for answers. She wants us to explain how we poison ex spies who betray Russia, but she still can’t explain Brexit 18 months after it happened. Oh Theresa,” added the aide.

Reports that Putin will explain himself once he stops laughing sit in stark contrast to the initial news that came out of the Kremlin this morning in which Putin was alleged to have said “how about I give you a deadline to fuck off with your deadlines”.