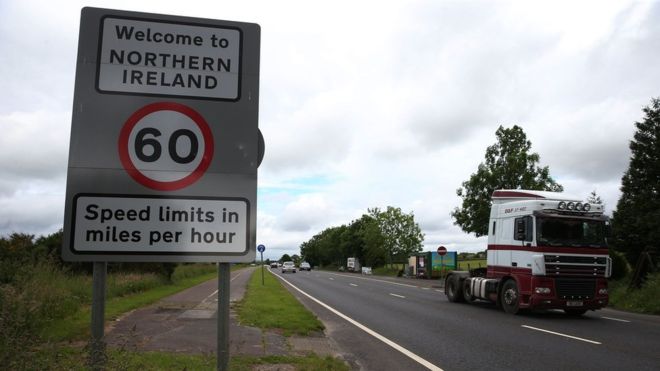 THERE IS palpable concern amongst the Irish public as well as those living in Northern Ireland as to the fallout from the possibility of a hard broder being put in place on the island of Ireland, with few experts able to even hazard a guess at the lasting impact.

Keen to set its readers’ minds at ease, WWN has endeavoured to answer a number of your questions with a series of detailed answers, which were only arrived at after weeks of painstaking research.

How hard will the hard border be

Excellent question from professional stapler-refiller Ciara Lally, Tramore. Under the terms of Article 50 the hard border must be no harder than a kick to the knackers administered by Paul O’Connell and no softer than a sliotar. We hope that’s cleared that one up. Be warned pro-Brexit hardliners have been spreading false rumours that the border could be as soft as the sweet whispers your lover delivers to your ear moments before climax. Not true.

Will I be cut in half if there’s a hard border?

Christ. No offence, curtain operator David O’Hare from Donegal, but what a stupid question. If you have the stupid idea to place your body across the hard border then of course it’ll slice you like a knife through butter. The British government is also exploring the possibility of slicing people who voted Remain in half too, but that would only affect the majority of people living in Northern Ireland.

How much more pissed off am I going to be by the continued ignorance of many people in Britain when it comes to Ireland and the border?

Thanks for the ‘Q’ John Ferris, communion bread producer, from Monaghan. John, it’s not looking good to be honest, we’ve already been in touch with your GP to increase your blood pressure medication. It looks like this sort of irritation is here to stay.

Not a question, more of a statement but your submission is still appreciated, fridge door handle tightening technician, Paul O’Dowd from Clare. It’s fairly accurate to say this is quite the mess Britain has gotten itself into alright.

Does Ireland get Liam Neeson

Bless her heart, lovely question from Ailbhe Hughes, a 6-year-old cocaine dealer from Kilkenny. This great question from Ailbhe highlights the difficulty we all face if a hard border becomes a fact of life on this island. Unfortunately we don’t get Liam Neeson, he’s very much his own man, and recently announced his intention to live inside a pint of Guinness in an unnamed location.

Will I have to put on a funny and exaggerated Northern Irish accent when crossing over the hard border to Northern Ireland, if it ever comes into effect?

Great question from retired Seagull hater, Bernie Collins, from Dublin. Sadly, this is true. While it may seem like great fun to begin with, the constant shuffling back and forth over the border will cause added pressure on the brain, in many cases this will lead to it exploding if it is forced to say ‘situation’ in a Northern Irish accent too many times.

Will it be harder to smuggle things over the border?

An odd question there from chief 32-county procurement officer, Gerry in Louth. We’d imagine it will be that little bit harder to smuggle things, yes. However a trial run recently under mock hard border conditions saw Daniel O’Donnell smuggled from Donegal right to the bottom of Lough Neagh.