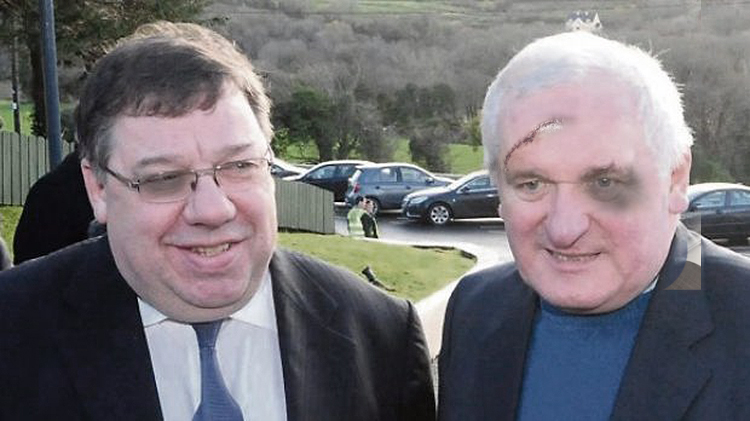 FORMER taoisigh Brian Cowen and Bertie Ahern were yesterday involved in a pull-apart scuffle at an afterparty in Dublin Castle, following a heated argument over who had done the most to set the country back and sink the Irish people into a generation of austerity and misery.

Cowen, who had earlier received an Honorary doctorate for eating jambons and swilling pints, was heard to remark about how he’d had to ‘finish the job that Ahern had started’, which caused Ahern to begin shouting loudly about who had done more to drive the country into the fucking ground.

“Have you even been investigated by a proper tribunal, you fat fuck,” Ahern shouted, slapping the crisps out of Cowen’s hands.

“You couldn’t even get the fucking troika to come in, you fucking lightweight! Stick to siphoning a few grand here and there, I was handing out billions! Billions with a fucking B!,” rebutted Cowan, prodding Ahern in the chest with a firm, fat finger.

The altercation then devolved into fisticuffs, with onlookers stating that neither of the former Fianna Fail leaders managed to land a significant blow on the other, before collapsing in a sweaty, panting heap on the ground.

The fight concluded soon after, when both former Taoisigh noticed that someone had dropped a fiver, and went running after it as the breeze blew it down the street.