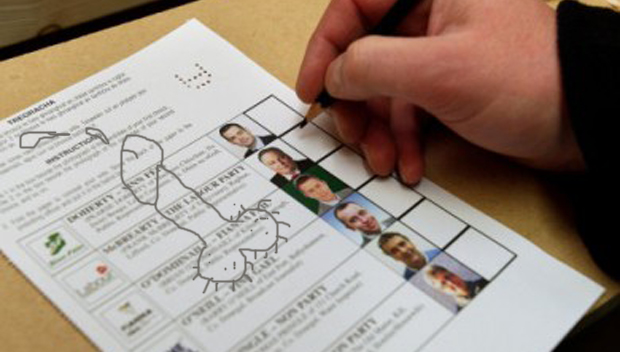 As part of WWN’s extensive coverage of the general election we are addressing the issue of spoiling your vote.

Many disgruntled and disillusioned voters will choose to arrive at a polling station only to spoil their vote. Political commentators see it as a controversial step to take, sighting the act as a slight on those who fought to bring freedom to Ireland.

However, more fierce criticism has been directed at so-called ‘spoilers’ in recent times due to the decline in artistry as people hastily scribble down on the ballot.

“There is a real lack of effort put into penis-based drawing on ballot papers these days,” remarked Ciaran Dunne, lecturer at NCAD in Dublin, “while I’m not politically motivated myself, I can’t stand by and see someone crudely draw a penis and leave out pubic hair, it’s disgraceful and lazy.”

Dunne is not the only one who has made his displeasure known at the standard of spoiling currently, as veteran vote-counter Mary Boland told WWN.

“I used to look forward to seeing them,” explained the 89-year-old, “you know the big veiny ones were great, they’d break up the day nicely and in my younger days I used to sneak a few home for, well, you know yourself,” the feisty pensioner added.

NCAD lecturer Dunne outlined guidelines for WWN on how to draw the perfect penis on your ballot paper.

“To achieve optimum GBW, that’s a ‘great big willy’ to those who don’t know, you must start with the shaft. Shaft is key. I cannot stress this enough. Make use of the entire page obviously and for the love of God do not neglect the balls. The number of times I’ve seen some truly beautiful portraits of shafts and heads only to see limp, half-arsed miniscule balls – it’s heartbreaking.”

Dunne also stressed the importance of practicing before going into the polling station and of course not to rush the drawing once you are in there.

Dunne is running a penis portrait workshop all day today in an effort to increase the quality of spoiled votes this voting day.