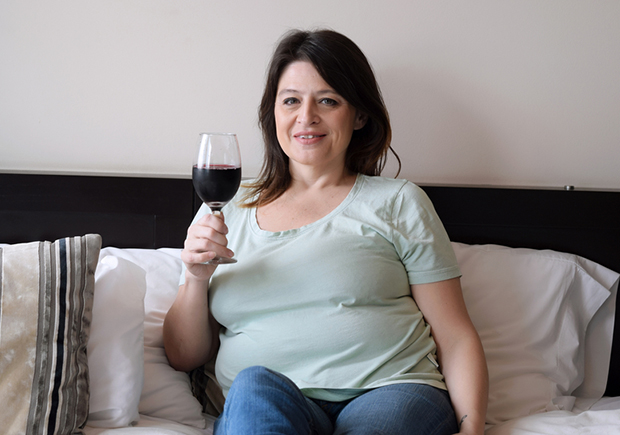 WATERFORD mother Grainné Filan has given her slow descent into alcoholism the humorous and wry nickname ‘wine o’clock’, WWN has learned.

The 49-year-old mother of three has referred privately to her consistent and worrisome consumption of both red and white wines with the words ‘wine o’clock’ followed by a short but loud giggle, much to the decreasing amusement of those closest to her.

Initially ‘wine o’clock’ struck once every couple of weeks in the company of friends or with Grainné’s husband Stephen. However, Grainné now observes the specific time of the day by herself, with increasingly large quantities of ‘just the one glass’.

Sources close to Grainné confirm that in recent years the official commencing of wine o’clock has been cut back from 9pm to as early as 5pm.

Using a clever method to obscure the fact that the mother of Niall (19), Mairead (15), and Orlaigh (12) regularly feels the need to stock up on alcohol, the insurance broker is in constant need of food from the local shop despite ample supplies already present in the presses and fridge.

“Just need more mushrooms, we never have enough of them do we?” Grainné queried early yesterday evening on her way to purchase 5 bottles of wine, 3 of which would be hidden from view in the hot press.

The mother of three’s slow descent into alcoholism is set to gather pace with the days getting shorter, as the darker evenings bring wine o’clock’s hour back by yet another 60 minutes.