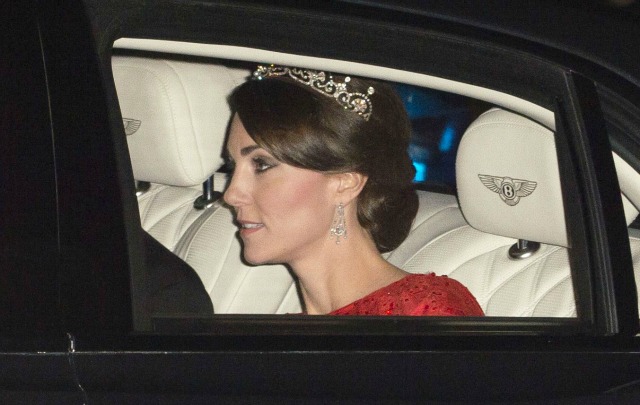 A MOTHER of two who is unapologetic about claiming £5mn-a-year in state benefits was spotted in a chauffeur driven Bentley last night wearing what appears to be a diamond encrusted crown.

Cathy Middleton, 33, from Reading in England, refused to explain why she was wearing such an expensive tiara last night, despite being unemployed for the past five years.

“She has two kids, a house paid for by the state and endless amounts of valuable clothes, shoes and vehicles at her disposal,” a neighbour told WWN today. “She doesn’t hide the fact that she’s bumming off taxpayers money either. Her husband too. They’re just disgusting if you ask me and it’s people like them, that’s giving Britain a bad name.”

The couple have previously admitted to claiming £96,000 per week in benefits – the equivalent of £5mn a year salary before tax – which is only a fraction of what the rest of her husband’s workshy family gets.

“Those Windsors have never worked a decent day in their lives,” another neighbour claimed. “I hear they’re pulling in over £15mn a year in benefits. The great-grandfather is an immigrant too! It’s a downright disgrace if you ask me”.

When asked this evening, the Windsor family refused to comment on their state handouts, and their home security guards even threatened to arrest this reporter for trespassing.