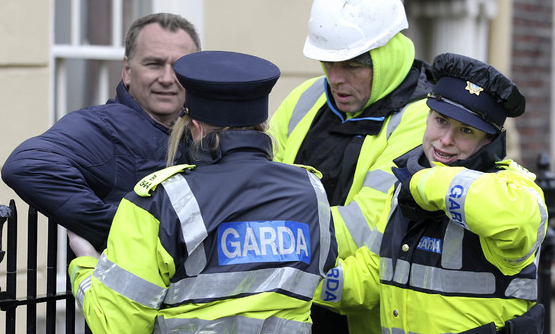 BELOVED TV personality Dáithí Ó Sé has been left disgraced after an undercover sting operation performed by a special Garda task force caught the Kerryman red-handed attempting to buy extra fadas for his name on the black market.

Fadas are highly regulated, and it is illegal to add fadas to your own name yourself, however, several fada smugglers operate in Gaelthacht areas, bringing large quantities of unused fadas to the Nation’s capital.

The modern Irish TV landscape has changed in recent years, placing a greater importance on ‘Irishness’ leading to many television personalities being favoured for their Irish sounding names or looks, which Ó Sé had in abundance until the availability of extra fadas on the black market became common place, muscling the 39-year-old out of contention for well-paid gigs.

“Depending on what sector you’re working in, a high number of fadas can be invaluable,” explained Garda John Dunne, head of the task force which arrested Ó Sé, “let’s say you worked for Bord Fáilte or Bord na Móna, big businesses from the US and elsewhere lap that shit up, so employers can fast track individuals with the most Irish names, with a preference for multiple fadas”.

Ó Sé was caught trying to buy just one single fada in an alleyway adjacent to Dublin’s Smithfield market from an undercover Garda. He was carrying €5,000 in cash.

“I was always teased when I was a kid by the other boys for having an ‘i’ in my name without a fada on it,” Ó Sé pleaded with arresting gardaí.

“You need the extra fadas in this TV game, you’d want to see the amount of corporate gigs Aóíbhínn Ní Shúílléábháín got after she bought her extra fadas, it was her that turned me onto it,” Ó Sé is alleged to have said as he was placed in the back of a police van.

If convicted Ó Sé could serve up to 3 years in prison.