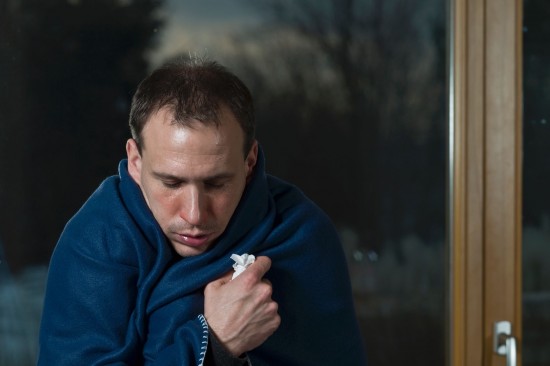 DESPITE advanced warning and a year on year increase in cases, the Nation’s wives and girlfriends are yet again completely unprepared for the impending moaning of men suffering from Man Flu.

Man Flu is known to be 1,000 times more excruciating than protracted childbirth (roughly 2.34 kicks to the testicles) and can go on to affect almost 100% of Irish men in the winter months.

A new initiative launched today called ‘Man Flu is your flu too’, aimed at getting the female of the species more involved in nursing men back to health, has been critical of women’s role in the recovery process.

“I have suffered from Man Flu several times in recent years and it is the same old story,” explained Man Flu awareness advocate Ultan Roan, “I don’t like saying it but the women have to buck up, ya know. I can see it in my wife now already, I get the odd sniffle and off she goes with her ‘tutting’. My illness is serious and I wouldn’t mind the constant tutting only I’d hate to think what that and the rolling her eyes to heaven is doing for her voice and vision, ya know?”

Brave Ulton will be part of an awareness team, which will give talks to women across the country detailing the harsh and often unreported side of the Man Flu epidemic.

“Just from the first few talks we’ve given you can tell they have no clue of the hardship. Did you know most of them didn’t know about that kind of scratchy feeling you can get at the back of your throat? Education is the key to achieving understanding of the affliction”, added Ultan.

Many women foolishly believe Man Flu is basically the same as another affliction called flu, which many women reportedly suffer from, only to go about their business with very little moaning or disruption.

“To any woman laughing at the expense of these brave men, I ask them, have you ever been so sick that you can barely muster the energy to moan about how sick you feel,” an impassioned health official said at the campaign’s launch.

“The Government has provided emergency funds to businesses to set up care areas for women who can’t stay at home to care for their Man Flu sufferers. Essentially it’s like creche for men only with soup, blankets, a bit of telly and reassuring words that confirm they’re not going to die.”