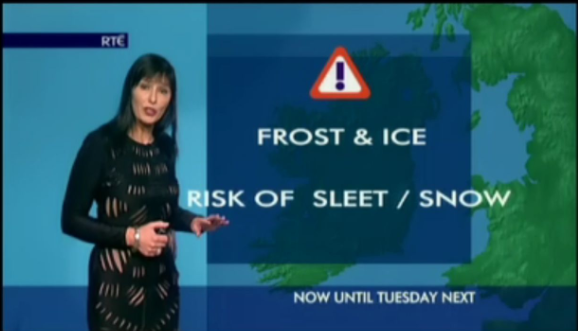 No matter your age or your county of birth one thing that unites Ireland more than any other subject is that of Ireland’s greatest weather reports. Such is the indelible mark left by these reports that children grow up quoting them and as adults they fondly look back on RTÉ’s finest meteorological moments sharing their memories with their own children.

Today, WWN looks back on the top 4 greatest RTÉ weather reports. While our decisions may be contentious, we remind you that the appraisal of weather reports is of course subjective.

4) 2006. A wet Tuesday. Spring time, but by Christ there wasn’t a sign of it out there on the streets. Nuala Carey. Red dress. We all know what I’m talking about. With purpose and a defiant tone Nuala told us all at home that, fear not, Spring was upon like a thief in the night, set to surprise us while making away with the good cutlery. That deft left hand of Nuala’s spread across the screen like butter on toast. ‘Rain should clear by tomorrow’, ‘temperature to rise by a few degrees’. It was in those wet weeks of March 2006 we felt there was no hope, but Nuala single handedly lifted the Nation’s spirits.

3) It was the night Irish weather came of age. September the 6th, 2001. Jean Byrne had rightly made a name for herself due to meteorological know-how, but Ireland would soon learn what weather plus a nice ensemble could achieve. ‘Incendiary’ led the headlines in the Irish Times the day after Jean wore ‘that dress’ and a cover and 84-page spread in RTÉ guide would follow. What was the weather that day? Does it matter? The sartorial elegance of that Oscar Valentino dress told us mortals at home the weather wasn’t just a place to get the down low on the relentless greyness of Ireland or advice on how many water proof layers you should wear to school, it was now about fashion, the glitz and the glamour. A record number of teenage boys reportedly hit puberty after that six one broadcast but that story is for another day.

2) Gay Byrne 1969. What the younger weather fans out there might not realise is that all RTÉ programming was exclusively hosted by Gay Byrne up until 1985 when the Byrne-RTÉ peace accord was struck. When we look back on the footage it is easy to laugh at its quaintness but Gay was pulling 24-hour shifts in order to keep the Irish televisual industry going. It was an August evening, and as anyone in-the-know would tell you, a real meteorological graveyard shift but Gay was defiant. He was out to prove the doubters wrong. No one has delivered a ‘scattered showers’ report with the same steely determination as Gay Mary Ulysses Byrne did that evening. The broadcast was watched by 12 million Irish people that night.

1) C’mon, like you need telling. Despite being incredibly weary of the medium of television and its ability to corrupt the young and bring about the end of humankind, former Taoiseach and President Eamon De Valera took to the RTÉ weather desk to deliver an emergency announcement. Several days after launching RTÉ television, the nation was greeted by De Valera, who, in hushed and sombre tones, informed the Irish public there was an emergency warning in place following reports of snow in some areas of the country. Sadly, Ireland was as ill-equipped to deal with snow, then as it is now, meaning the loss of over 13,000 lives. The 2cm snowfall caused devastation throughout the land. But, had it not been for the President’s broadcast, literally millions of people would have died. That was the influence and power of RTÉ’s greatest ever weather broadcast.

Honorable mention goes to December 4th 2004 when Gerry Murphy was attacked by a rapid sheep live in RTÉ studios during a late night weather update.