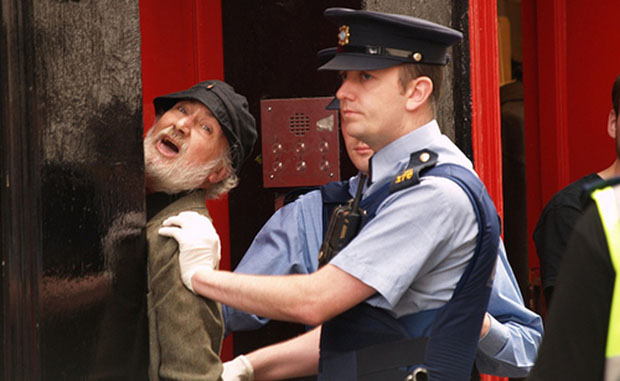 A COACH of 52 American tourists have been arrested and charged with breaking the decibel barrier in Kerry this afternoon following a three week rampage across the west coast of Ireland.

Armed Gardaí, wearing earmuffs, swooped on Purcell’s Tour Bus at around 1pm outside Muckross House in Kilarney. The rowdy passengers were told to remain silent during the operation, but many resisted and began talking aloud, forcing several Gardaí to restrain offenders.

In Ireland, a decibel limit of 75 is placed on all verbal interaction between people talking in public. Anyone who breaks that limit can be fined, or even charged with disturbing the peace if they re-offend.

“This particular coach of people were warned numerous times about their ongoing breach of the decibel range,” explained Garda Patrick Hartley, who had been chasing the tour for quite some time. “After an extensive operation, we finally apprehended them outside Muckross House this afternoon. Many of the people on board are third and fourth time offenders and maybe looking at a lengthy jail sentence”.

The Garda operation has been criticised by a number of local councillors you have never heard of with their comments making front page news. Many fear asking an American to be quiet will result in ‘reputational damage’ for Ireland, costing the country $20 billion in revenue every second and resulting in a stern talking to from Barack Obama.

However, businesses in the area welcomed today’s sting, with many restaurant owners praising Gardaí for their work.

“It’s just not fair that people should have to put up with that auld shit every year,” said restaurant owner Thomas Clarke. “You wouldn’t believe the high turn around of staff we have here as a result of loud American customers. No one should have listened to them whining on about every damn thing that pops into their empty heads. It’s a miracle no one has been killed yet”.