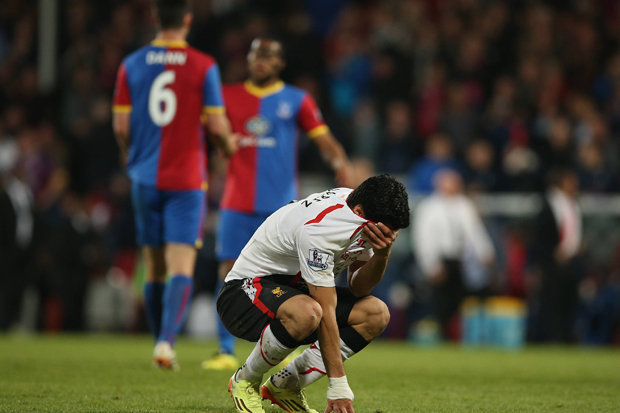 In a rare example of the blue and red halves of Manchester coming together, the entire Crystal Palace team are set to receive the freedom of the city for their astonishing comeback against Premier League title hopefuls Liverpool.

In what was a truly remarkable second half Crystal Palace clawed back 3 goals to draw with a Liverpool side left devastated when the final whistle echoed throughout Selhurst Park.

“There is not a City or United fan that didn’t feel some sort of sado-erotic pleasure at the sight of Luis Suarez crying, it was more beautiful than when I first saw my new born son,” claimed Tom Hughes, head of the A City United Against Liverpool fan club.

“I have to confess I was sporting a chubby in the pub but I’m sure I wasn’t alone,” claimed United fan Richards Jones who watched the Liverpool match with friends in Manchester city centre.

“It’s not every day that City and United supporters can join together in a common goal but Crystal Palace provided that platform,” shared Mayor of Manchester Naeem ul Hassan, “and I think we at the council have duly awarded them with the freedom of the city.”

While a number of Manchester natives rushed into tattoo parlours today to get a crying Suarez emblazoned on their chest, others showed there joy in different ways. An unnamed man rang his estranged and adulterous brother, a United fan to bury the hatchet and share in the joy of Liverpool’s misery.

Meanwhile in Liverpool thousands of fans have called in sick to work, collectively asking to be ‘left alone’ while concluding that ‘no one else understands my pain’ despite the fact that had they won last night they would have, in all likelihood still conceded the title on goal difference to Manchester City.

Star striker Suarez is said to be finally out of tears as Liverpool fans pleaded on social media for the player to left alone throughout the night.

The ceremony honouring the Crystal Palace players will an open top bus and take in both Old Trafford and the Etihad with many speculating United will gift the London club the Community Shield while City will present the League Cup as a token their appreciation.

United’s attempt to hand over Tom Cleverley as a gift was politely rejected by Crystal Palace manager Tony Pulis.