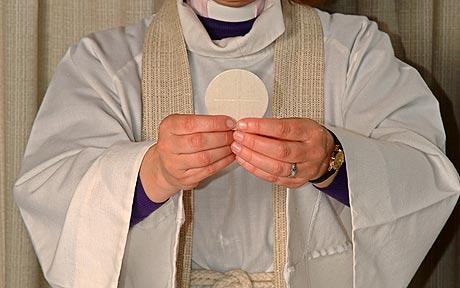 WWN endeavours at all times to bring its readers exclusive stories that blow the lid on secret Ireland and the scandals the elite want to keep hidden. Today is no different as WWN beat out our inferior rival publications to reveal we have discovered the ceremony known as First Holy Communion is in fact just a front for a crazy religious cult.

We interviewed as many as 100 parents who had been preparing their children for their first holy communion completely unaware that a cult had infiltrated the ceremony in the hope of recruiting the innocent children into a religious cult.

We advise our readers that they may find some elements of the following article upsetting and disturbing.

“I’m lost for words,” said Joan Kileen, mother of Kelly (8) before weeping in front of this reporter. “I had been looking for a lovely gown for Kelly for weeks, saving up. Even went to the credit union for a small loan to buy shoes, jewellery and the dress.”

“I had no idea this occasion would be highjacked to fill Kelly’s head with religious propaganda,” added the brave mother, “I admit spending close to €1,500 euro on a day out for Kelly seems excessive, but we were here to celebrate the fact she was in 2nd class and it’s May.”

Joan is not alone in expressing her shock and disgust at the fact a religious organisation was hijacking an occasion of material celebration at which it was hoped her daughter would collect upwards of €500 from friends and relatives.

“I feel like I’ve let my little Thomas down,” shared ashamed father, John Gowan, “I sent him off to school thinking, you know, he’s getting an education and then he comes back to me telling he has to eat the body of some 2,00 year old dead man,” added John.

Children as young as 7 are believed to be coerced into chanting to a religious figure known as a ‘priest’ while he gives them a sacrament called ‘communion’.

“I went in to check on Emily,” explained, concerned mother, Laura Hogan, “and she was saying in her sleep ‘body of Christ, amen’ over and over again. Then she tells me they’ve done no school work because they have to prepare for this cult of some sort.”

“The teacher then told me that this whole time while I had been spending crazy money on a white dress Emily would only wear once, booking a restaurant for 30 people and paying for a photographer that my daughter was being inducted into a religious organisation. You just never know what’s really going on, I advise all parents hold your child tight tonight and tell them you love them.”

“I brought my husband and our youngest, Peter along to the ceremony and was told by some member of this cult that my newborn should get something called a baptism because despite being 18 days old, he had committed some sort of grave sin and was destined to burn alive in some strange bit of fire. I rang the Gardaí immediately.”