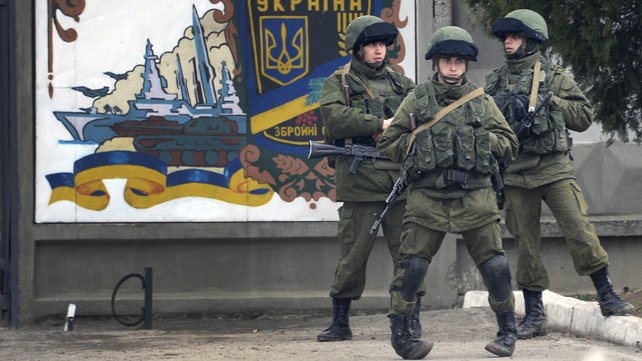 Members of the public who have expressed shock and dismay at Russia’s recent encroachment on the border of Ukraine, specifically the region of Crimea, have been told to read a history book.

Slightly older members of the public were quick to air cynical comments relating to the all too familiar sight of a large nation, seemingly unanswerable to any and all objectors, flouting a number of international laws.

While some Irish teenagers, feeling a deep sense of injustice about these developments recently expressed their dismay at the behaviour of Russia in Crimea in their second year history class.

“Isn’t this where the UN, the G8, NATO, diplomacy, trade restriction and embargoes are supposed to come into play?” remarked 14 year-old history student Clara Delaney only to be told she should read a history book by her world-weary teacher Mr. Higgins.

“But the UN is made up of 193 member states, surely these tensions can be avoided as could the ones in Syria and beyond,” Clara shot back to her now disinterested teacher and society at large.

Had Clara, who was outing herself as quite the nuisance and trouble maker, bothered to read a history book she would have realised that countries like Iraq, Afghanistan, Cambodia, Rwanda, Somalia, Sudan, Syria, Iran, Brazil, Guatemala, Argentina, Tibet, Indonesia, Cuba, Ghana, Chile have been similarly toyed with or neglected in a similar fashion to Ukraine. This is more than acceptable and most worryingly, it is expected.

“So what, that makes it okay? Are all adults and world leaders I’m told to respect basically going to ignore this?” Clara ventured before being told unequivocally to stop answering back and shut up.

Clara will now spend the reminder of the week in detention for her outspoken trouble making.