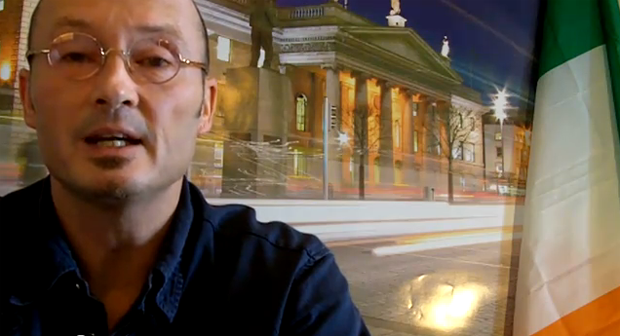 Oriel Park season ticket holder and 9/11 conspiracy theorist Jim Corr has claimed the Easter Rising of 1916 was a false flag operation cooked up by the British Government.

“The story of the Easter Rising is riddled with inconsistencies and half-truths” corr’d Jim as he strummed the opening bars to Runaway on a sweet Stratocaster. “The forces in power had to have known in advance that such an insurrection was imminent and not only failed to prevent it, but aided it at several key junctures”

“The idea that such a small group of school teachers and shopkeepers could seize and hold so many key buildings in such a short space of time is laughable. Then they were promptly executed without proper trial, to stop them from revealing the fact that the British had set them up with weapons and training in the preceding years”.

Pressed for extra information by absolutely no-one, the Corrs axe-man took time out of pissing around on Netflix to further prattle on.

“It’s very convenient that that rubble from the Rising was so quickly buried” jammed Jim, referring to the disposal of much of the debris from O’Connell Street in the foundations of what is now Croke Park.

“Forensic examinations would have revealed that all of the damage was caused by British forces. Irish ‘rebels’ were loaded into a train and transported out of the city while the Brits shelled the city centre to create the illusion of a battle taking place. All this information is out there, if people would just wake up”

Just to be polite while waiting on a taxi to get us the fuck back to the office, we asked if there was any word of The Corrs getting back together.

“I had hoped the girls would be up for going on the second season of The Big Reunion but they wouldn’t return my calls” moped the 9/11 Truther. “But I’m putting something together with a few cousins. We’ll still be able to call ourselves The Corrs, we just have to wait until someone learns the tin whistle”.