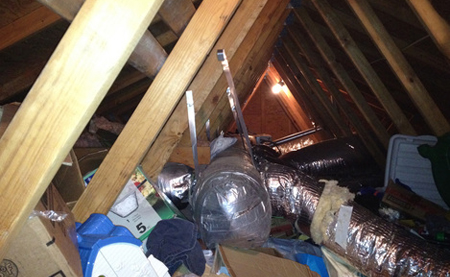 A COUNTY Waterford Man discovered the elusive HTTP 404 hiding in his attic after he began putting away his Christmas decorations late yesterday evening.

The father-of-four said he was absolutely shocked to discover it had been living in his attic for over 15 years without ever being detected.

“We thought the noises in the attic were just the beams of the house settling.” he said. “Little did we know we were harbouring an international error message which has been on the run for almost 20 years.”

Gardai quickly arrived to the Price home shortly after midnight to arrest the suspect.

Sources say HTTP 404 went quietly and without incident before being transported to Port Laois maximum security prison in a heavily armoured prison van.

It is believed that 404 first took flight from the United States in 1996, leaving behind a trail of dead links in its wake.

Expert in Uniform Resource Locators (URL’s), Alan Johnston of the California Institute of Technology, believes that millions of invalid IP addresses and error messages can now go on with their daily requests.

“I suppose it was the ‘not knowing where to turn to’ that was the worst part for them .” said Johnston. “At least now we have finally found HTTP 404 and can get on with our Internet lives.”

US Foreign Secretary Hillary Clinton has requested for the error message to be extradited immediately to Washington, where it will go on trial for annoying the absolute shit out of the entire world.