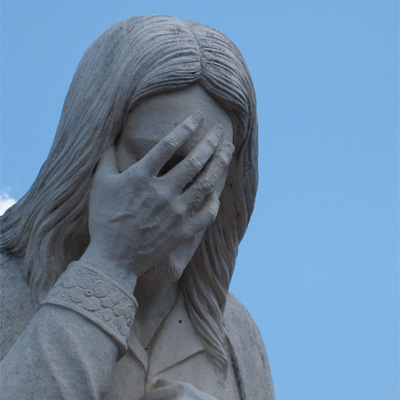 THE MEEK have announced they are suing Jesus Christ of Nazareth over an Earth inheritance claim which was promised to them nearly 2000 years ago.

The group have said they are ‘sick and tired’ of waiting around for the inheritance to be signed over to them, and have hired a team of lawyers to help ‘get what is rightfully theirs’.

According to the complaint filed yesterday in New York, the third in the list of the Beatitudes is meekness, and in it, Jesus declares, “ Blessed are the meek for they shall inherit the earth”.

Lawyers for the meek claim this is an open and shut case.

However, Pope Benedict XVI, who is in charge of managing Jesus’ estate, has claimed the inheritance is null and void due to the length of time involved in the claim, stating the group was ‘too late’ in its bid for the inheritance by about 1000 years.

This latest action against the only son of God follows last years dramatic televised trial when the ‘Poor of Spirit’ successfully sued him for the Kingdom of Heaven.

Jesus has since appealed the decision and continues to fight for his families cause from his council flat in Sheffield, England.

“This last year was very tough for myself and dad. We’re struggling to make ends meat at the moment. I get a few nixers off the books doing a bit of joinery here and there. But its never enough.”

“Now they want to take the Earth from us. Where will we go then?” he proclaimed.

Jesus asked the presiding Judge Pontius Pilot not to allow television cameras in the courtroom as it was in breach of his families basic human rights. The Judge immediately overruled the motion and then refused Jesus free legal aid on the grounds that he was meant to be dead a long time ago.

WWN News will televise the trial live when it begins in January.