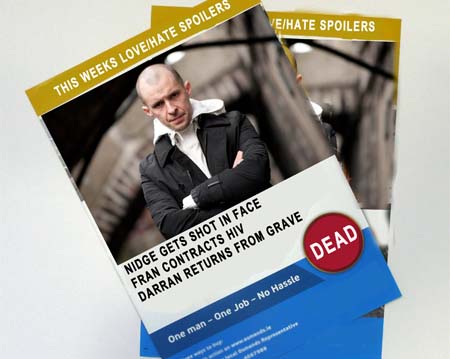 THE PRESS Association of Ireland has confirmed that it will print and post over two million Love/Hate leaflets packed with Spoilers from next week, in a bid to ruin unwatched episodes for people who haven’t yet seen the current series.

The spoilers will go out early next Monday morning following the show’s season finale on Sunday night.

“Hopefully we can publish every single detail before those people who haven’t watched this year’s show get a glimpse of it.” said chairman of the association Gerry Murphy. “We understand there are thousands of losers out there who wanted to wait for the whole series to finish before watching it.

“It is our duty as journalists to ruin every single episode for all those sick patient bastards out there!”

Since beginning over a month ago, the Irish press has made a weekly effort to ruin the previous night’s show by posting important plot points.

“If people are not on the same Love/Hate page at the same time, then they deserve for the show to be spoiled.” added Mr. Murphy. “Get with the program. Only dickheads hold off for the whole series to end.”

The leaflets are expected to summarise every single plot point from the last episode in the current series. On top of that, every single online publication is expected to follow suit by releasing various screengrabs and memes relating to the show.

Fans who have yet to watch the new season are being advised to cop the fuck on and watch the first five episodes of season four before Sunday, as they haven’t a hope in hell of avoiding next weeks spoilers.