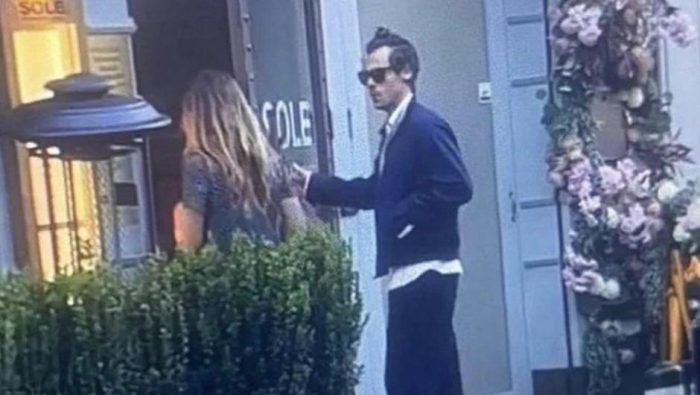 OH MY GOD, Harry is here! This is not a drill folks!

After one helpful social media user snapped the pair entering Sole restaurant on South William St yesterday, we here at GASH ugly cried from the excitement and just generally being emotionally overwhelmed before immediately leaving the office and all work responsibilities.

Running on foot and increasingly out of breath, we raced to Sole. Shut up this is normal behaviour, I have a National Union of Journalists membership. It’s not stalking, it’s ‘pursuing a matter of grave importance to thirsty Styles fans’.

Harry was gone when I arrived at Sole but using basic info gathering which is incredibly normal because journalism, I was able to narrow down options on where he might be headed next.

Harry is likely staying in a 5 star hotel nearby, right? And what 5 star hotels are in the general vicinity? Oh stop judging me, you’re part of this sick sordid machine. Don’t act like you wouldn’t lose your shit if I got a picture of Harry necking a Guinness or munching Tayto. You’d be humping your pillow for days, hypocrite!

Where were we? The Westbury is 140 metres away according to Google, The Shelbourne is 700 metres away.

Now Harry is 6 feet tall so it would take him roughly 45 seconds to get to the Westbury on foot, 6 minute 35 seconds for the Shelbourne. I, being much shorter, would have to run.

But which direction to go? It was then I recalled that Harry once said in an interview that his favourite fragrance was Tom Ford Tobacco Vanille.

Now sniffing the air aggressively I thought I felt a strong scent in the direction of Stephen’s Green.

Using my nostrils as some sort of odour GPS tracking system I began walking faster. At every corner turned, a false dawn – it was not Harry but just another androgynous, gender-neutral attire wearing Dubliner.

Exhausted, I rang every hotel in Dublin begging for information but despite declaring I was a journalist receptionists made out like I was some sort of unhinged obsessive.

Defeated, I had no choice but to trudge back to the office and collect a bunch of people’s tweets and reactions tweets in an article and call it a day.

UPDATE: It seemed the logical thing to rummage through the bins of Sole on my way back. Eating some of the scraps brought me closer to Harry, gaining an insight into the mind of one of pop’s foremost stars. The stray hair I found on a discarded broken plate is now in a jar in my house – for journalistic purposes.

UPDATE: A colleague tells me Harry was spotted swimming in Dalkey. Renting a submarine, I make my approach from Dalkey Island.