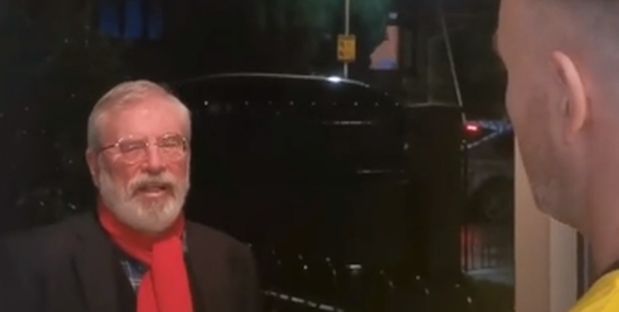 FORMER SINN FÉIN president Gerry Adams has apologised for any offence caused by a misjudged appearance in a tongue-in-cheek advert for a body disposal firm, the apology comes just days after appearing in a festive themed sketch criticised by victims of the Provisional IRA.

“It was meant to be in good spirit and no one set out to offend anyone,” said the director of an advert for a clandestine underground network of grave diggers who provide a service for people who want other people gone.

Heavily leaning into his metamorphosis from controversial figure with blood on his hands into cuddly and harmless human meme, Adams has gained a cult following for his antics online supplementing his previous Republican cult following. However, with his latest venture he may have gone too far.

In the video Adams can be seen saying ‘I can inform you that if you want something gone, it really stays Disappeared with Slán Services LTD. Unlike kneecaps, these prices can’t be beat’.

Initially repeatedly denying having ever been in a video in his life, Adams apologised for any offence caused if anyone could be offended by such things in the first place.

Some have labeled the video as ‘a slap in the face for victims and wholly insensitive’ while others labeled it ‘what the fuck was he thinking’.

Elsewhere, Mary Lou McDonald and Michelle O’Neill are said to be at loggerheads over the incident as they argue about whose job it was to babysit Adams on the day the advert was filmed.

Meanwhile, in response to the controversy Sinn Féin have confirmed a number of dedicated supporters have promised to man internet comment sections to inform victims why they’re just dry shites who can’t take a joke.