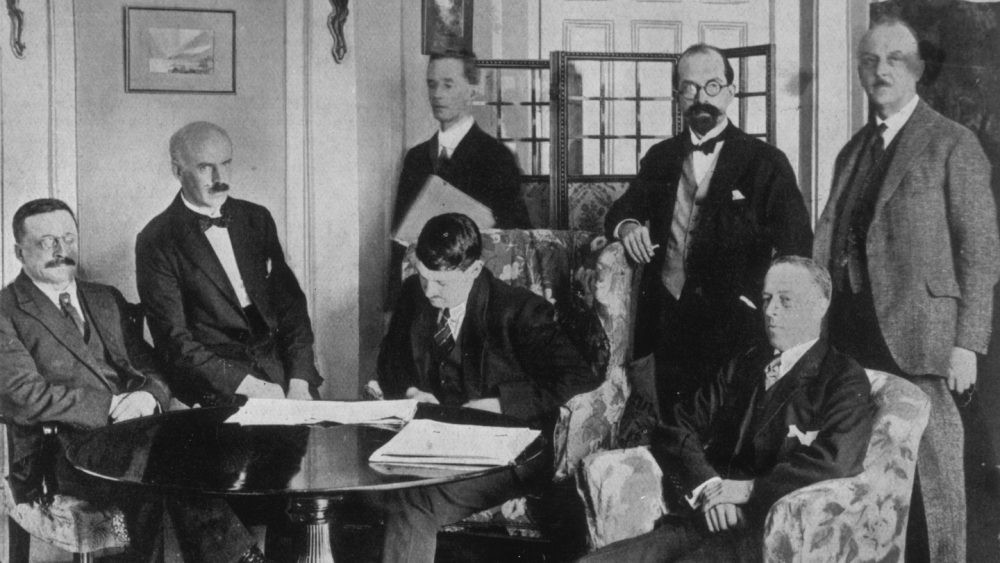 AFTER SIGNING the Anglo Irish Treaty 100 years ago today Michael Collins famously said “thank fuck Twitter isn’t around, could you imagine the roasting I’d get from those know it all wankers”.

Initially stating that he had signed his own death warrant, Collins feared that creating only a partial Free State could lead to conflict that would still remain in one form or another 100 years on.

Although clearly vexed about potential implications of the Treaty the time, Collins wasn’t all doom and gloom as reflected by Arthur Griffith’s diary entry that day: “raised prospect of a fractured society, families torn apart and civil war with Michael but all he said was ‘if they ever make a film about me let them know I want Liam Neeson to play me and some Brit to play Dev, he’d hate that'”.

The British government’s negotiating team included one Winston Churchill, who would go on to be most widely known for the Bengal famine.

“The shame here is not saying goodbye to the land in the south but that we can’t so easily use their men like cannon fodder in any future world wars,” Churchill’s dairies said at the time.

“That’s the Loyalist finally satisfied now once and for all, can’t imagine they’ll ever find anything to complain about ever again”.

The negotiations themselves didn’t get off to the best of starts:

“Bunked off the first day of negotiations to do a tour of all the places Jack the Ripper killed his victims” – Collins’ diary read.

“Bunked off again the next day to see the Jack the Ripper musical in the West End. Fecking class” – Collins’ diary read the following day.

“The Brits have become increasingly impatient with us after Michael yet again tried to sneak ‘Ireland gets Jamaica’ into the final text of the Treaty” – Griffith relayed by telegram back to Dublin.

In turn the Brits kept cutting the ‘promise not use soldiers to kill innocent Catholics’ clause.

De Valera famously did not make the trip to London and in modern parlance he essentially read every WhatsApp Collins sent him, two blue ticks clearly visible but acted like he never received them upon Collins’ return. De Valera also said that the power given to Griffith and Collins didn’t count as it only lasted as long as an Instagram story. This is believed to be the first ever recorded instance of gaslighting.

Upon his return, Collins spoke in far from glowing terms about the British negotiating party.

“Not a mask between them. As if the Spanish flu never happened. That’s the fucking Brits for you”.

Gerry Adams, pivotal to whole endeavour as tea boy, was unhappy with the Treaty but had clear reverence for Griffith.

“Asked Arthur if I could claim credit for all the good things about this era of Irish Republicanism for a future project I definitely wouldn’t also be calling Sinn Féin for some reason. He said no, very miffed actually. Just gonna do it anyway” – Adams wrote in his diary at the time.

“Lads, we’re quids in” – remarked the Anglo Irish Historians Association at the time, having already produced 84 books on the Treaty negotiations before the first day was over.