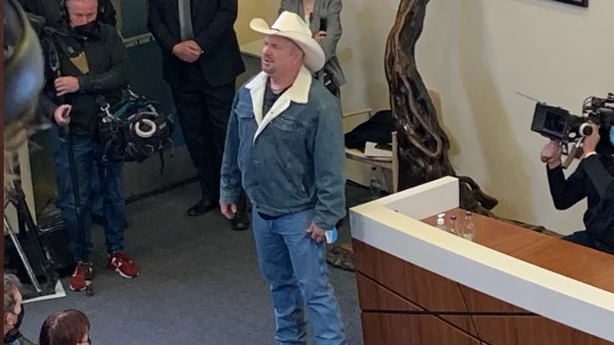 PUTTING BEHIND the bad taste his abandoned five date residency at Croke Park left in the mouth of everyone in Ireland back in 2014, Garth Brooks was on site at GAA HQ for an easy PR exercise to launch his two 2022 dates at the venue.

“I’m honoured to playing at Croke Park, the historic home of English soccer. What is it you Brits say, ‘It’s Coming Home’, it certainly is and I’m glad all the bad blood and nastiness is behind us and we can all start with a clean slate,” Brooks said wearing his trademark cowboy hat covered in commemorative poppies.

Fielding questions from journalists, Brooks spoke warmly of his love for Ireland.

“Those cute red telephone boxes, London Bridge, Shakespeare, Yorkshire pud, honestly I’ll say whatever hokey Irish praising stuff you want me to if he helps me gouge, what is it you said you called them, ‘culchies’?” said Brooks to assembled media.

Brooks then produced a cricket bat and offered to pose for photos.

“It was actually like a birth in the family for us.” explained the nation in response to a widely publicised quote from Brooks in which he said the 2014 gig cancellations were like a ‘death in the family’.

Asked if he was worried after a repeat of the sort objections that plagued is 2014 concerts, Brooks showcased some of disarming cowboy charm.

“We’ve learned our lessons obviously, and that’s why we’ve hired former Mossad agents to permanently train sniper rifles on any busybodies who think of trying anything”.