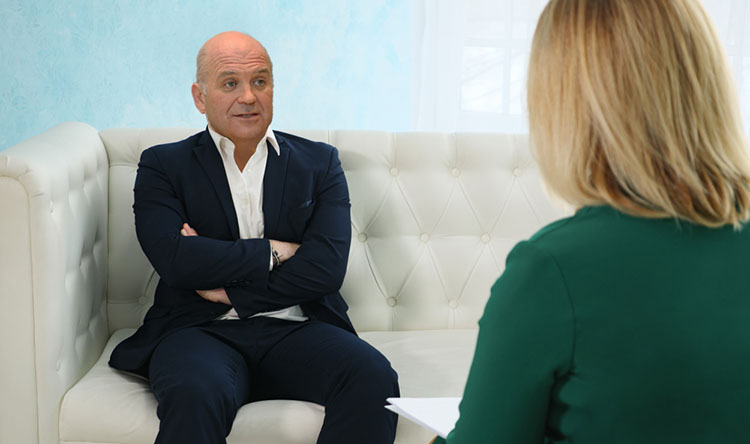 HANDING Ireland’s Chief Medical Officer an oversized model of an antigen test, psychologist Dr. Laura Wardly delicately attempted to get down to the root of Tony Holohan’s irrational hatred of the once frowned rapid test, which is now suddenly being rolled out against his advice by the Irish government, some 12 months too late.

“Okay, okay, it’s nothing like that. It’s just the name; it sounds like ‘aunty Jen’, my mum’s sister and a retired nurse,” an emotional Holohan revealed, now damping tears from his eyes with an embroidered ‘TH’ handkerchief, “Jen would always babysit me when my parents worked during the day and would send me to school even if I was sick.

“She would just test my temperature using the back of her hand on my forehead and would tell me I was fine and there was nothing wrong with me”.

Successfully getting down to the core of his issue with the use of antigen tests, Dr. Wardly probed the CMO some more.

“Now, Tony, it says here in my records that you would go out of your way to tell your teachers how many people were absent from school any given day, can you tell us more about that?” she asked.

“I would get into fights because other kids called me a rat for letting teachers know who was mitching and who was actually sick, it became a thing, you know?” Holohan said his eyes transfixed, staring out the psychologist’s window, “they’d call me terrible names and would egg my house – it’s all coming back to me now,” he then broke down before concluding, “Jesus, that’s it, I must have buried everything and began reliving it through NPHET!”

“This is good, Tony, we’re making real progress here,” Dr. Wardly told her patient, “Do you think this will change how you advise government from now on?”

“Absolutely, I’m going to call for a three-month level 5 plus lockdown – that should teach those little mitching bastards for egging my house,” the CMO insisted, before calling an emergency briefing via WhatsApp for later today.