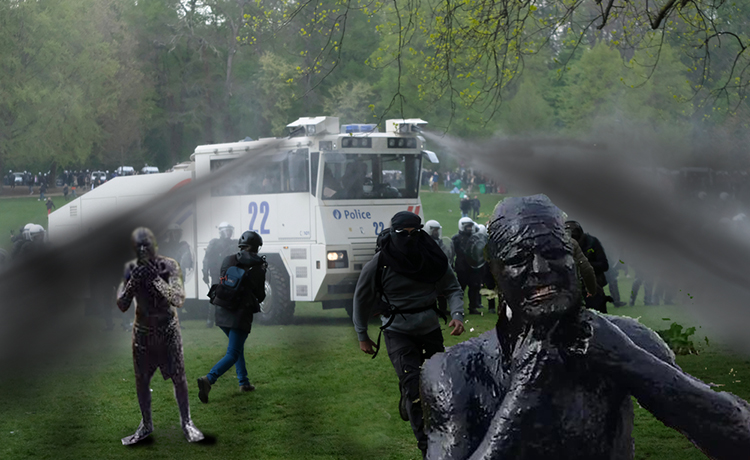 A YOUTH led protest in Glasgow which threatened to disrupt the egos of leading political figures in attendance has thankfully been dispersed before any lucrative future positions on the boards of fossil fuel companies were harmed.

Police were quick to disperse the protest using high-powered anti-riot oil canons supplied by Shell at zero cost to the leaders in attendance and maximum cost to the planet.

“Where we can contribute in our little way to make things worse, we try,” confirmed fossil fuel firms as they delighted in watching protesters attempting to regain their footing only to repeatedly slip and fall.

“Sorry, I can’t hear you? Big oil are destroying what?” added the firms as protesters choked on the oil.

“They’re not doing much to endear themselves to us, the generation that destroyed the planet, are they? I think they’d be better saving their energy for surviving the inevitable wasteland that awaits them,” added one observer, who completely nailed the pathetic protest by stating “but what about China?”

Organised by Fridays for Future Scotland and attended by activist Greta Thunberg, the protest was seeking to call out the closed shop nature of the conference and the self-congratulatory back slapping over doing the bare minimum.

Police who intervened have been criticised for some of the actions they took.

“Placing the protesters’ heads in plastic six pack rings and choking their necks while hitting them with single use non-recyclable batons was a step too far,” remarked one shocked onlooker, who subsequently changed his mind when he realised some of the protesters had nose piercings and had caused minor traffic delays.