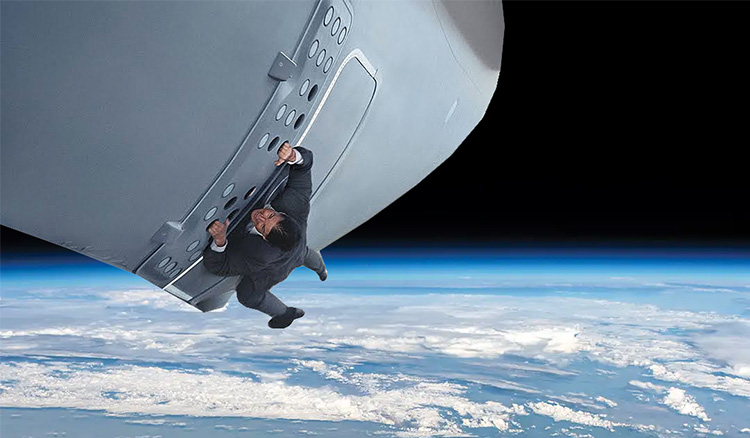 BANGING angrily on the outside of the Russian spacecraft carrying the crew which beat out the Mission Impossible actor to become the first filmmakers to make a movie in space, a livid Tom Cruise has demanded he is immediately given a part in their space-set movie.

“Show me the movie!” screamed Cruise, maintaining his remarkable dedication to doing his own stunts even if they involve clinging on to the side of a rocket leaving the earth’s atmosphere.

“I was the chosen one, I was supposed to be the first. By order of L. Ron Hubbard open this rocket or so help me Xenu, I’m going to go Jack Reach in there and fuck you up,” Cruise shouted at actor Yulia Peresild and director Klim Shipenko as they progressed skyward to the International Space Station.

Initially unaware they had a pint-sized would-be stowaway clinging on for life, the Russian pair where now in advanced negotiations with Cruise about residuals, script rewrites and whether the movie would be given a cinema release or stream on Netflix.

“Okay, okay I’ve got an idea, what if I played a crazed maniac trying to commandeer a space mission due to a maniacal desire to experience the most extreme adrenaline rushes all so I don’t have to sit still for a moment and contemplate the fragility of my faith and confront the fact it’s a balls-to-wall crazy cult?” offered a desperate Cruise, whose head was about to explode any second now if he didn’t gain access to the craft.

However, his on-the-fly audition was rejected by director Shipenko who confessed he didn’t think the American had it in him to play such a fanciful role so out of character for Hollywood A-lister.