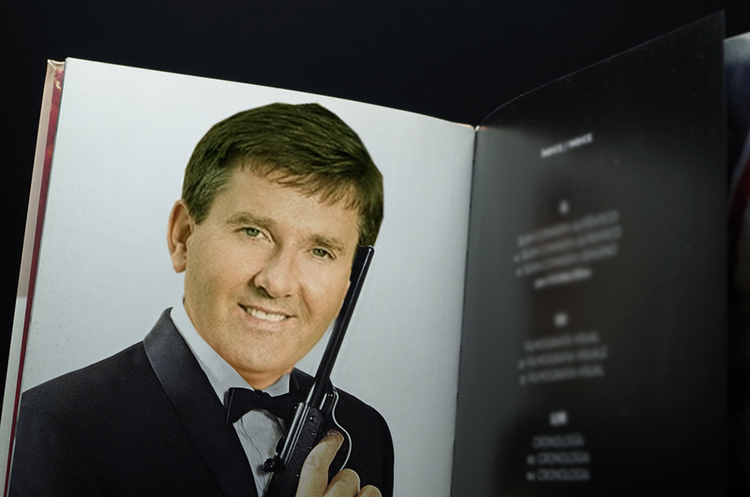 LOST to distant memory and wedged in between Timothy Dalton and Pierce Brosnan, Donegal’s favourite son Daniel O’Donnell is the most overlooked James Bond ever committed to film.

WWN looks back on his one-and-done stint as England’s most deadly weapon, James Bond.

“You have to remember this guy was shit hot at the time, the Yanks were going mad for his song and dance routine, so some of Daniel’s strength in that area were worked into the story,” Bond script writer Julian Leveson told WWN, of the 1993 production.

The action was centred around a maniacal villain who planned to brain wash people through line dancing, creating vast networks of dancing devotees who could, through line-dancing hypnotism be activated as deadly killing machines. Daniel as Bond would have to stop this all. The working title of the film was ‘No Time To Die, Hi’.

The classic femme fatale Bond girl, Cuntry Western, was a southern belle with charm and a deadly talent for making men yodel during sex to the point of deadly exhaustion. Played by Sharon Stone, some felt she was several levels below Daniel’s calibre and sexual magnetism.

“It was a dream for me to write for Daniel as Bond, but I think there were hints of diva behaviour on set in LA,” added Levenson.

“He said he wanted his trailer to be an exact replica of Donegal. The studio relented after some arguing, but Daniel wanted it exactly like Donegal so the studio had to hire extras to play everyone in Donegal Daniel would know well,” shared producer Sam Saffin, who felt there was no harm in indulging O’Donnell as they all felt he was delivering a great performance on set.

“They even imported the seagulls direct from Donegal,” added Saffin.

As production wore on, Daniel convinced the producers to move Bond further and further away from his stuffy English roots, Donegal-ifying him bit by bit. First came ‘Bound Doran’ a S&M loving henchman who went round in a gimp mask with a whip, then there was the changing of filming location.

Producers bent to his every whim, even moving much of the movie’s action to his native Donegal, which proved a huge boost to the economy at the time.

“Ay, Daniel done right by us all as always, the Bond producers had this story worked out where Bond would be skiing down the side of the Alps in this daring chase, and the villain’s lair would be inside Mont Blanc. Sure, Daniel said, why not just use Errigal and so they did,” confirmed one Donegal local, Nevin Doherty.

If you look close enough you can still see the line across Errigal which the Bond producers cut through to insert the vast evil hideout of the Bond baddie.

Just as everyone felt Daniel was set to play Bond for another five films, disaster struck in the form of early audience testing.

“They said when Daniel was on screen they only saw death in his eyes, sure Bond is a ruthless killing machine, but there has to be some humanity in those eyes still. One guy said it was like someone had pulled a plug from Daniel’s ass and let all the humanity drain out of him,” added Saffin.

No Time To Die, Hi was quietly released in cinemas, with the studios trying to forget a big gamble that didn’t pay off. Bombing internationally, the movie is still the highest grossing in Donegal.