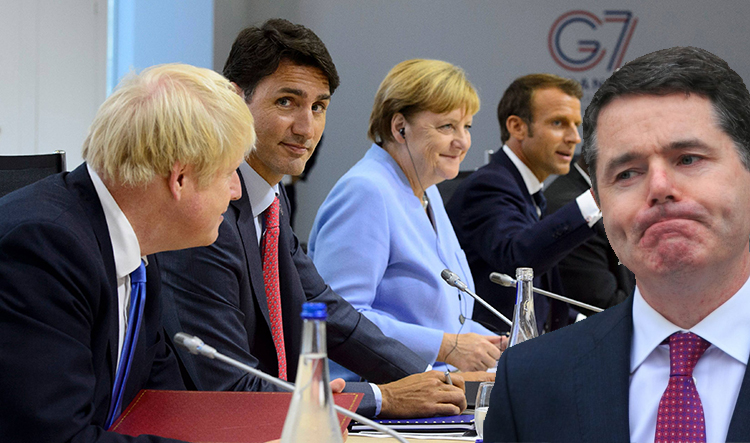 IRELAND’S panicked Minister for Finance Paschal Donohoe has been frantically ringing world leaders attending the G7 summit in Cornwall in a bid to prevent a formal agreement on corporation tax, which could see the end to Ireland’s 12.5% rate.

Having failed to avert the meeting going ahead with a fake bomb threat which saw a Cornwall hotel near the summit evacuated yesterday, the Irish government is now insisting they are fully behind the adoption of a corporation tax of 15% but must first explain a strange quirk of the Irish language.

“Now, to you guys, it might look like we’re saying we’ll keep our 12.5% tax rate, but you see this a translation from our beautiful language, Gaeilge. Why 15% means 12.5% is anyone’s guess but we’re a lyrical, confounding people and it’s a mad language altogether” Donohoe explained, somehow making it passed the G7 meeting’s extensive security.

“And may I remind you President Biden the Irish language does something similar when we say ‘neutral’ in Irish but really it means letting your war planes refuel in Shannon Airport,” he continued.

News of growing pressure on Ireland’s tax haven status was compounded by the news Facebook would allow staff at its Irish offices to work remotely from several countries. However, the social media giant confirmed its ‘pay fuck all tax on profits’ status would remain working from Ireland.

Elsewhere, G7 leaders said that saying ‘we must all play our part to avert the climate crisis’ while jetting in from all over the world may look massively hypocritical at first viewing, but the decision to meet in person was only taken after US President Joe Biden struggled to get Zoom working on his work laptop.

Acknowledging the G7 leaders pledging to finalise commitments to move towards a tax regime of 15% corporation tax, big corporations said they are similarly committed to using loopholes and the Cayman Islands.