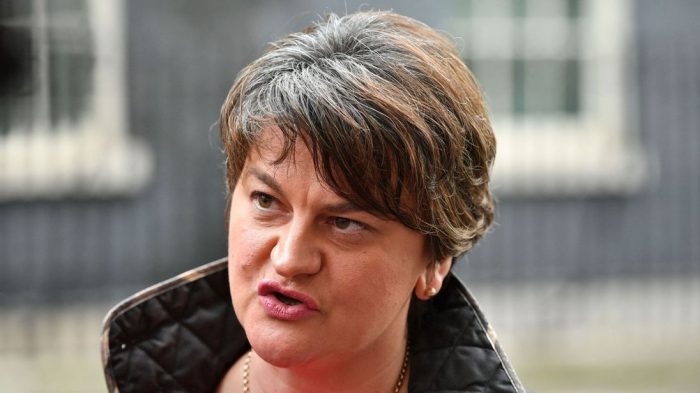 HER CLOTHES stinking of acrid smoke and some excess fuel on her hands visibly glistening in the light, Arlene Foster appealed for calm following a 6th night of rioting and attacks perpetrated by loyalist thugs.

“She said the exact same thing in her behind closed doors meeting with Loyalist paramilitaries weeks ago, I’d show you a transcript but obviously we don’t record anything,” said a spokesperson for the DUP leader, as Foster was treated by a physio for a case of petrol bomber’s elbow.

“And in fairness now, she said the exact same things all that time she and her party was advocating impoverishing and destabilising Northern Ireland by backing a Brexit vote while using dark money they received from law breaking pro-Leave groups to buy up Brexit ads,” added the spokesperson for the leader who puts the D-U-P in ‘being duped’.

Such was the damage caused by yet another night of disturbances, Foster could almost see the smoke from the petrol bombed bus from her home in Fermanagh.

“She even met with the Chief Inspector of the PSNI this morning, who she called on to resign last week, to offer her thoughts and prayers for the 55 and counting police officers injured during this spate of completely unavoidable thuggery which absolutely no politician whipped up, and therefore can receive none of the blame,” added the spokesperson while loading empty glass bottles at a petrol bomb refueling station at the peace wall gate at Lanark Way.

Elsewhere the vast majority of Northern Ireland locals have confirmed they’re ‘sick of this shit’ for what must the thousandth time.